Valuations Are Fair and Earnings Should Improve 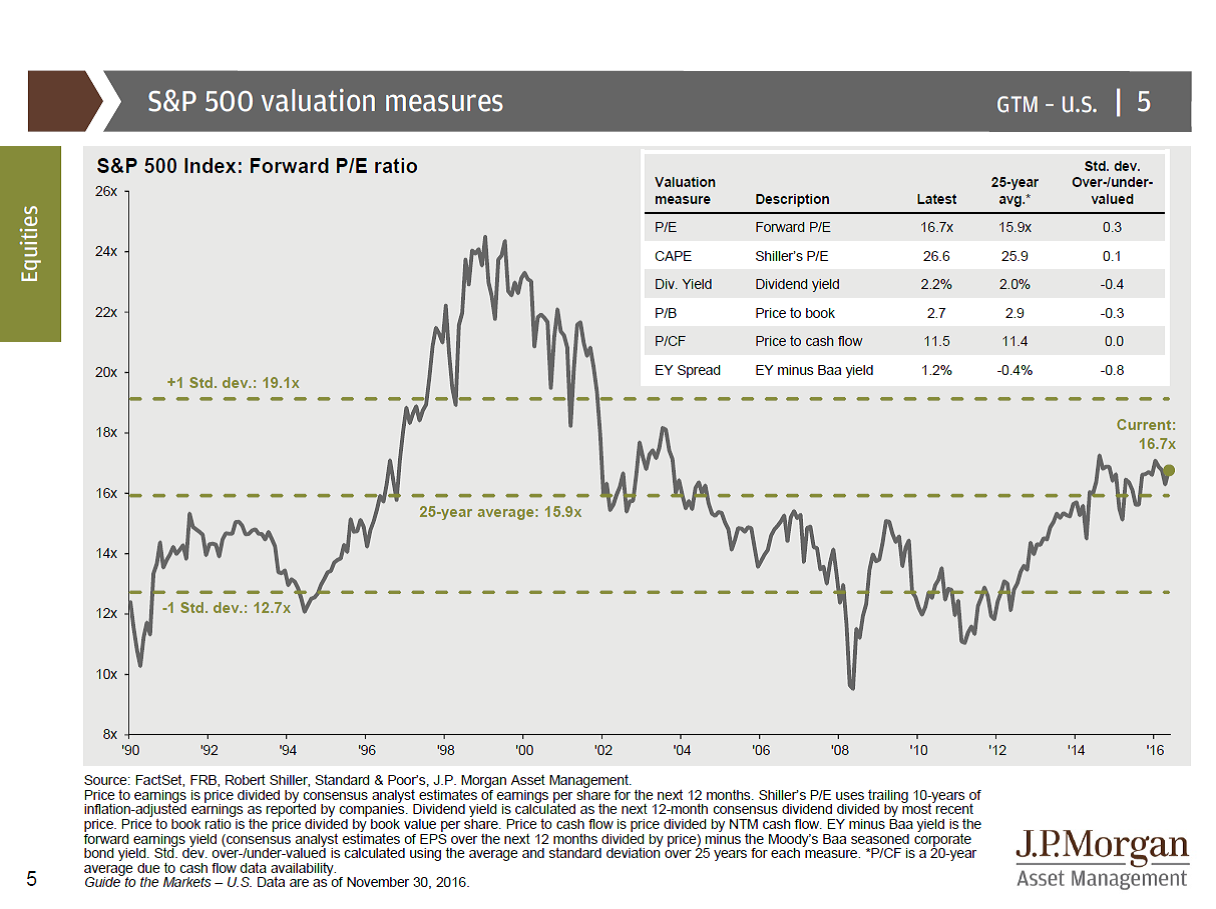 Since the election the stock market is making new highs seemingly every day. Does that mean we should worry? We don’t think so. The S&P 500 is trading at just a little more than the 20 year price to earnings multiple average of 15.9. It is possible for the market to continue to move up without expanding the multiple if corporate earnings accelerate. The last 8 years we have had GDP growth consistently below 3%. Corporate tax reform alone being proposed by the incoming administration could boost earnings by as much as 20% according to some experts.

The expectation is that the regulatory climate would see an immediate relaxation. This would benefit small and mid-size companies the most. These companies have been squeezed by the burdensome regulations passed in the last 8 years. Earnings are expected to improve as we move away from the losses created in the energy sector by falling oil prices. These companies will likely add to the S&P 500 earnings picture going forward. 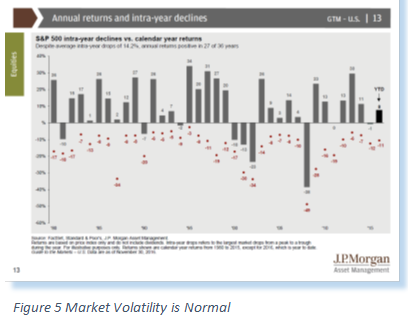 While corporate profits might increase and the economy might grow faster in the next few years, it doesn’t change the dynamic that increasing returns coincide with increased risk. It may lead to higher returns but it will also lead to high volatility.

One of the results of the monetary stimulus applied by central banks the world over are that they actually reduced volatility in the last 8 years. Now that the stimulus has been removed in the US, we should expect market volatility to normalize. Normal volatility over the last 26 years is a downside correction of on average 14.2% in any given year. We haven’t seen a sell-off that size since 2011, which was the year of the US debt downgrade, government shutdown, sequestration cuts and Greek crisis 2.0. You can see on the chart in figure 5, that even in years with strong positive returns it is not unusual for a double digit pull back mid year. 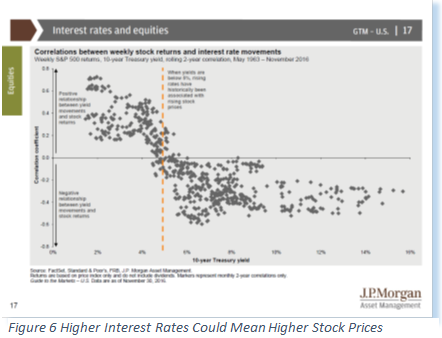 As soon as the election results were in, it was the bond market that reacted the most with the 10 year Treasury bond rate moving from about 1.75% to 2.5% within just a few days. This was a reaction to what the market sees as an increased inflationary environment tied to the policy pursuits most likely to be pursued by the new administration. This caused a drop in the value of long dated treasury bonds and some high quality corporate debt. The rise in rates may have been a little too far too fast. We do not see rates accelerating from here as there are still some demographic and structural issues that should keep the near term rates fairly low compared to rates in a the early 2000’s. It will take a few years to get rates above 4 or 5% in our opinion.

So rates are rising, should we be worried about the rising rates causing a recession? No not any time soon. In fact, as rates begin to rise after an economic recovery stocks tend to go up along with them until we reach about 4.5% and even then markets can still rise additionally. Once you reach about 5% we could see equities falter as this would put pressure on borrowing for capital investment (see figure 6).

The constant drum beat that a recession is inevitable because cycles don’t last this long couldn’t be more incorrect. The market rise since the credit crisis of 2007-08 is now in its 8th year with only 2 small yearly declines for some parts of the equity market, in 2011 and 2015.  If we were to look at the past recoveries from recession and the expansions that followed, we notice not only have quite a few lasted longer, but they were accompanied by some very different dynamics than the current expansion. It’s what makes this expansion different that could possibly spell a much longer expansion than other periods. 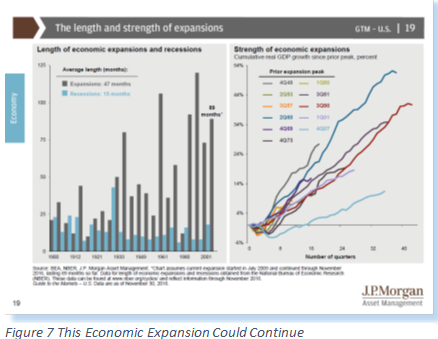 In figure 7, we see 10 other expansions and the corresponding length of growth as well as the magnitude. The steeper the line, the higher the growth rate during that period. The current expansion is the lowest line with much less incline than previous expansions. The significance of this lack of growth in the current expansion is exactly why this expansion can continue, barring some unforeseen outside event causing a sudden drop in economic activity.

Here is why – the conditions that occur near the end of an expansion are wage inflation, commodity inflation and rising rates. The Federal Reserve will usually respond by increasing rates to stop the inflation, which is harmful to our pocketbooks and can choke off business investment and borrowing. This is generally how recessions in the last several decades have happened. Too much investment when times are good and then inflation, at which time the Fed pours water on the economy. We have little to no inflation, business investment has been anemic and rates are still near all-time lows.  This recovery could and likely will continue until we see more robust growth for an extended period.

The US Dollar Continues To Be Strong

Last year we mentioned the benefits of a stronger dollar being lower energy costs, causing a boost to consumer confidence and the likelihood of increased consumer spending in other parts of the economy. That is exactly what happened in 2016.

Wages are improving and the unemployment rate continues to come down, this should only amplify consumer spending. Though the stronger dollar is not good for the trade gap as exports decline, it is very good for the consumer who can afford more imported goods and domestic services. Consumer spending is more than 68% of the US GDP a far greater component of our economy.

Though valuations overseas are still better than the US, the geopolitical risks remain high and could cause the international space to continue underperforming. That it is tough to say. We remain over weight US to International.

Many Investors Have Not Bought into This MarketWith investment flows still in the negative the last 2 years it means that the average investor has still not bought into the rally. In fact equity flows are mostly negative during the entire recovery. This means at some point the average Joe is going to show up at the party and bring some friends and some more wine or beer. Don’t be surprised if that started to happen as positive economic information continues to come in and stocks rise in 2017. There will most likely also be a rotation out of bonds and into equities as the growth in the economy picks up.

As always, we greatly appreciate your trust and confidence. If you have any questions on this or anything else, please reach out to a member of our team. We wish you a happy, healthy and successful 2017.