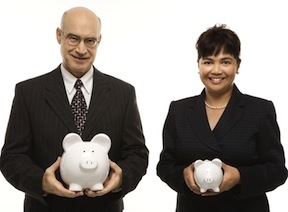 Here’s a question I have been pondering lately: Do men and women invest differently?

Books, research, and independent studies have concluded—yes, women do invest differently than their male counterparts.
And, in many cases, it leads to greater earnings, especially in the long-term.

As a financial adviser, having observed the investment behavior on Wall Street for more than 25 years, I must say that I concur.
So, what exactly is the difference in the male and female approach?

Let’s take a look at how these differences have developed.

According to Forbes Magazine, “Ample research has persistently shown that the wages of women, irrespective of qualifications and experience, are lower for the same kind of work.”

Although some gender division of labor is changing, historically, women have made different choices than men due to greater family responsibilities.

In her article, Gender Differences in Personal Saving Behavior,for the Association for Financial Counseling and Planning Education, Virginia Tech Consumer Studies Program Professor Dr. Patti J. Fisher explains that because women in the United States have been dependent on men for financial security for so many decades, gender differences in economic well-being persist.

Further, Fisher notes that, overall, there is a substantial gender gap in all retirement income sources, including Social Security, pensions, savings, and earnings from post-retirement employment. Poverty rates were also significantly higher among women in all but two of the developed countries.

According to the report Financial Literacy and Retirement Preparedness, researchers Annamaria Lusardi and Olivia S. Mitchell explain how financial literacy has been found to affect both savings and investment choices.

“Our review reveals that many households are unfamiliar with even the most basic economic concepts needed to make saving and investment decisions,” they explain.

“Such financial illiteracy is widespread: the young and older people in the United States and many other countries appear woefully under-informed about basic financial computations, with serious implications for saving, retirement planning, mortgages, and other decisions.”

Men simply have had more time than women to accumulate wealth.

In a 40-year working career, the average woman loses $431,000 as the result of the wage gap, explain Sarah Jane Glynn and Audrey Powers in their highly insightful article, The Top 10 Facts About the Wage Gap.

Consequently, the median earnings for women were $36,931 compared to $47,715 for men, and neither real median earnings nor the female-to-male earnings ratio has improved since 2009.

Men also tend to have more financial knowledge than women, and therefore tend to be more confident.

But sometimes this works against them when it comes to making good decisions. According to a Wall Street Journal article by reporter Jason Zweig, “… in the testosterone-poisoned sandbox of the male investor, the most important thing is beating the other guy; the second most important: bragging about it … [and] asking for advice is an admission of inferiority.”

This may be an over-exaggeration of men’s overconfidence—but then again, it does drive the point home.

Women + Social Security: What You Need To Do To Prepare For Retirement