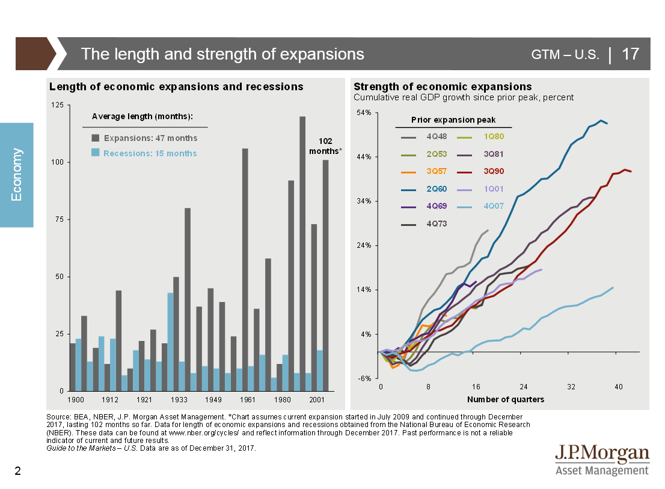 In case you missed it, you can now watch our first webinar of the year, the EBW 2018 Market and Economic Outlook. EBW was joined by Samantha Azzarello, a Global Market Strategist on the J.P. Morgan Asset Management Global Market Insights Strategy Team. She provided an overview of the global market outlook and macroeconomic trends for 2018.

You can access this video by following this link.

The Question and Answer (Q&A) portion of the webinar was cut short, but we have added questions from those attending below and the market analyst team at J.P. Morgan has been kind enough to provide the answers. 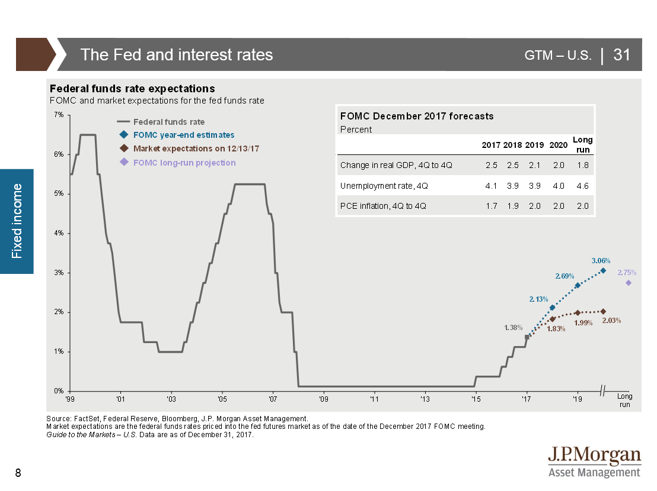 Q: What about Trump’s policy of tariffs?  Wouldn’t that cause the market to go down?

A: On tariffs, this link is to a blog post done by Gabriela Santos from our team that addresses this question.

To summarize, the recent trade restrictions have been narrow in focus, which can be absorbed by the global economy and shrugged off by markets. However, should these restriction become more expansive in ways that impact major industries or countries, it may prove to be disruptive for markets and is a risk we’re monitoring.

Q: Any concerns re: weakening dollar?

A: In terms of recent weakness, a lot has to do with policy change – the current administration is very willing to abandon what has been a decades-long policy of a “strong dollar.” The most recent evidence of this came at Davos, when Secretary Mnuchin publicly commented that the dollar should be weaker. This rhetoric certainly helped to drive the currency lower.

Beyond this, inflation expectations are picking up and global central banks have been indicating that they are willing to ease back on QE programs in the coming year. This makes U.S. government debt less attractive to overseas investors, which in turn reduces some price pressure that kept the dollar low.

From a markets standpoint, a weaker dollar will bode well for sectors that get a large portion of their revenues abroad like technology.

Q: Years ago when I studied international finance, political risk was one of the areas that needed to be assessed in such investing. Until now, I haven't really considered such things with regard to investments in the US.

Do you consider relatively low probability, "black swan" events in your projections? In light of the current political climate in the US, there are at least several areas of concern that are out of the ordinary. Some of these include war, perhaps on a large scale, in Korea, Northeastern Europe (Baltic states), the Mideast (including Iran), and perhaps even Southeast Asia (China in the South China Sea, for example). Another area of risk is in the possibility of impeachment of the president, especially in light of the continuing, and very effective, interference by Russia and perhaps others in our political system.

All of these risks are unusual, even recalling the height of the cold war. Do you have any thoughts on such things?

A: Our LTCMA team does the heavy lifting on our market and economic projections over the next 10-15 years. The reason we project out this far is “black swans” would essentially be smoothed out in terms of impact. You can see our long-term projections here

Historically, geopolitics have not had a lasting impact on US equity markets. The business cycle has been a more important factor for investors to follow than conflict. We believe this will continue to hold true in that black swans will cause short-term volatility in markets, but (barring economic shocks) have minimal long-term market implications.

We haven’t done much work on potential impeachment, however, looking at the current state of US politics the big win for Republicans in the form of tax reform has been passed and, we believe, will provide a short term boost to the US economy. If an impeachment were to occur, it would surely bring about volatility into the markets, but the reality of Mike Pence assuming office, may actually be welcome by Republicans and markets as he would be seen as a more mild-tempered president and more willing to negotiate. Again, barring any economic shocks, the markets would take it in stride.

Q:  The presenter addressed Fed policy, but what about the political economic policy of the administration.  In the presentation she stated that the U.S. has been exporting more than importing, which has been good for our economy.  The administration just initiated a tariff on solar panels and some other items.  Wouldn’t this cause other countries to retaliate with their own tariffs and possibly trigger a trade war, which would be bad for everyone’s economy?

A: On tariffs, these are some comments from my colleague John Manley on our team: Global protectionism is definitely something to be concerned about, still as long as the U.S. is still engaged in aggressive trade talks. However, we don’t believe that it poses a very severe problem, since most of these relationships are symbiotic and will likely not change too much from where they are now. For example, if the U.S. was to pull out of NAFTA, trade agreements between the U.S. and Canada would revert back to an earlier trade agreement with similar terms, and trade between the U.S. and Mexico would more closely mirror the Most Favored Nations agreement from the WTO (tariffs would increase and prices would go up, but the U.S. economy should be able to absorb this). With regard to China, China has a good deal of leverage but also engages in considerable poor behavior – think dumping and intellectual property theft. It would make sense if trade negotiations took a harder line with China, and it should result in the U.S. emerging with a stronger more competitive manufacturing sector.

All in all, the recent trade restrictions have been narrow in focus, which can be absorbed by the global economy and shrugged off by markets. However, should these restriction become more expansive in ways that impact major industries or countries, it may prove to be disruptive for markets and is a risk we’re monitoring.