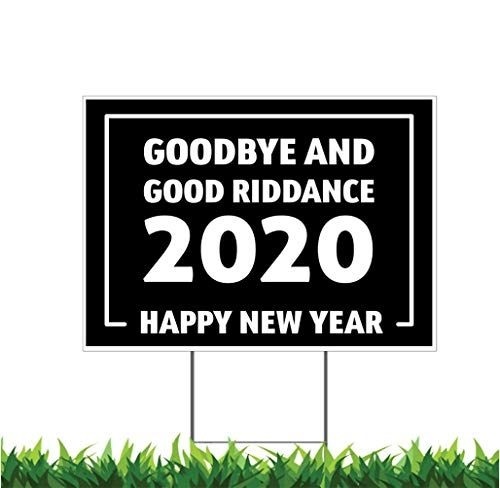 Good Riddance! The 2020 Year in Review

Wow, 2020, amiright? I don’t know what else to say that hasn’t already been said a hundred times. Honestly, I’m a bit bored of the constant memes and social media posts comparing the year to dumpster fires and other quasi-humorous analogies. How about we just say good riddance to the year and leave it at that. 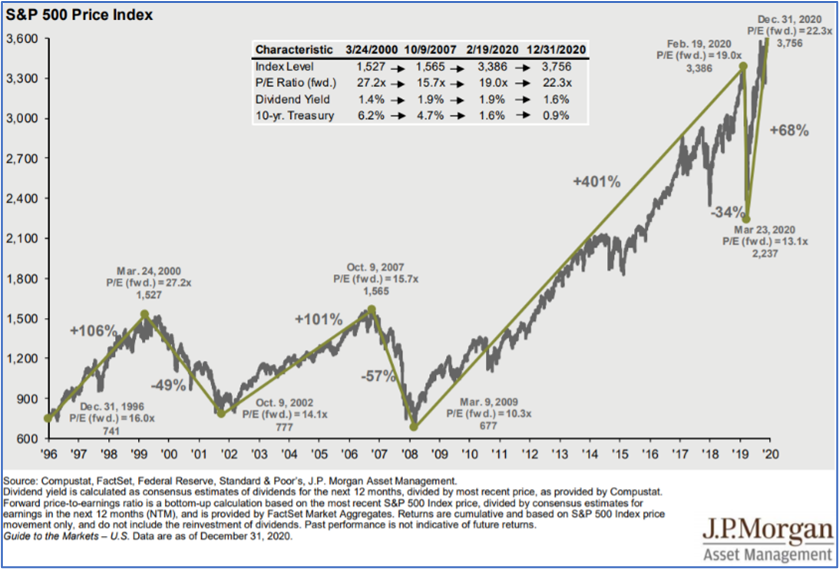 Surprisingly, however, at least for the stock market the year ended much as it began – in a strong bull market. I’ll bet the question many people are asking, is “Why?” Why, in a year that saw the worst pandemic in 100 years, widespread social unrest, and when the number of unemployed soared by almost 5 million and lines at food banks stretched for miles, did Wall Street do so well? I know, it doesn’t seem to make any sense. But once you dive a bit deeper, the picture does become clearer. We’ll get to that in a bit, but first let’s hit the highlights (yes, even 2020 had a few highlights).

As we entered 2020, EBW’s portfolio positioning had already turned more defensive. We had reduced risk in our most conservative allocations and had plans to continue this de-risking through the rest of our allocations over the course of the year. We weren’t taking this action based on reports of a previously-unidentified illness in Wuhan Provence, China, but because we felt stock prices were not accurately reflecting the risk of a slowing economy. These measures proved valuable as late-winter turned to spring and our record-long, 11-year bull market turned into the fastest decline into a bear market in history. It took only 20 trading days for the Dow Jones Industrial Average to decline by 20%, the definition of a bear market. By comparison, the second fastest bear market decline was 36 trading days back in another year that lives in infamy: 1929. The average time for the Dow to decline by 20% is 255 days[1]. By March 23rd, the markets would shed over 1/3 of their value.

In late March, Congress passed the CARES Act, a $2 trillion aid package that included $300 billion in direct payments to Americans, increased unemployment benefits, and created the Paycheck Protection Program, among other provisions. This, combined with unprecedented action by Jerome Powell and the Federal Reserve Bank, as well as measures from central banks across the globe, did much to assuage the fears of investors that this would be a prolonged event, and markets began to recover. Despite continued virus concerns, varying degrees of lockdowns, a staggering 31% decline in Q2 US economic activity, and massive oil price declines, stock markets across the globe continued their upward march. Until September that is, when markets sank by almost 10% before resuming the climb. And of course, we finished the year with the most contentious election in memory and yet another stimulus bill. After all the ups and downs of the year, investors who had displayed nerves of steel and the patience of Job were rewarded with handsome returns. Ultimately the S&P 500 (500 large US corporations) returned 18.4%. Bonds and even international stocks also joined the party, with 7.51% and 8.28% returns, respectively.[2] 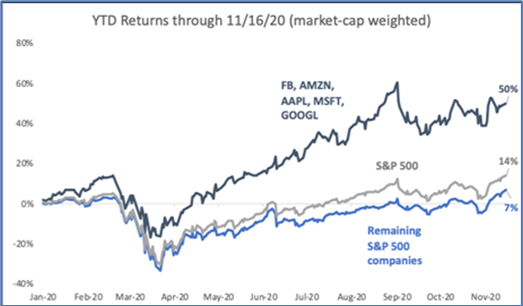 So, there’s the quick rundown of the year’s market events. But that doesn’t answer the question of why. Let’s start by looking at the S&P 500 and how it’s constructed. The S&P 500 is a market-capitalization-weighted index of 500 of the largest publicly traded companies in the US. This means that the larger a company, the greater its stock price movements will affect the overall index. Over the last few years, the index has been increasingly concentrated in only a handful of very large businesses, typically large technology companies. So, what we really saw in 2020 was very strong performance from Apple, Amazon, Microsoft, Google, and Facebook. The stock prices of these five companies alone grew by a combined 50% through November 16th, compared to just 7% for the other 495 companies that comprise the S&P 500[3]. If you take the S&P 500 and split it right down the middle, half of the companies will be what are called Large-Growth companies, as they are growing faster than the average, and the other half are called Large-Value companies. It’s these growth companies that are dominated by the tech sector. The value companies are your “old economy” businesses like banks, energy, industrials, and health care. The index which tracks the growth companies returned 38.49% in 2020. By comparison, the index that tracks the value companies barely squeaked out a gain, returning just 2.8%. [4] Considering the extreme measures taken to combat the COVID-19 virus, it makes sense that technology companies are doing so well. Find me someone who hasn’t received nine Amazon deliveries in the last two weeks (unless they’re being routed by USPS through Kuala Lumpur, but that’s a whole different conversation) or someone who hasn’t been on 36 Zoom meetings or streamed 98 hours of The Office. Netflix, Zoom, Microsoft and many other technology companies have made it possible for many people to do their jobs from the safety of their homes, for kids to attend school remotely, and for all of us to stay connected to loved ones. Tech spending soared as companies adjusted to the challenges of 2020, and the stock prices of the companies that provided solutions were rewarded.

It’s also common that bull markets start before the economy really takes off; in fact our last bull market did this too. Market participants are not basing their views on what’s happening today. Sure, today’s headlines can impact the daily direction, but markets are generally looking ahead by six months. With advancements in the vaccines and promises of a robust distribution network, market participants are expecting a gradual return to normalcy over the year and, with it, increased economic activity. 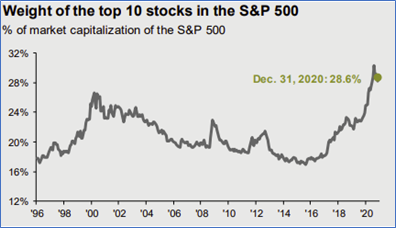 While the stock market did quite well, there are red flags that cannot be ignored. Most significantly, in our opinion, is the rising debt level. A nation’s debt as compared to the sum of all goods and services it creates is a key measure of its future economic prospects. Too much debt can impede a country’s ability to grow. The debt-to-GDP measure is also widely used by investors to determine a country’s ability to repay its debt. In 2020, the US reached the inauspicious milestone of 100% debt-to-GDP, and in 2021 is expected to cross that key level for the first time since WWII. By way of comparison, in 2007, prior to the last recession, our debt-to-GDP was 62%. Clearly investors aren’t overly concerned with our massive debt levels, as evidenced by the very low rate they are willing to accept in order to loan us money. However, this could change at any time. That having been said, thanks to historically low interest rates, interest payments on our national debt have not grown commensurately with our debt levels. In fact, net outlays for interest on the debt decreased in FY 2020 as compared to FY 2019[5]. In 2010, the interest rate on a 10-year US Treasury Note was 3.2% and interest payments on our debt amounted to 5.7% of total expenditures. In 2020, when the interest rate on a 10-year Treasury was 2%, despite a tripling of public debt, interest payments only rose by about 2% of total federal expenses. In our opinion, this is not a near-term issue, but it is certainly a big concern as we look to the future. As mandatory spending, such as debt payments rise, there is less money available to invest in the future. Spending on infrastructure, research and development and education are all declining while we spend more on our past largess. 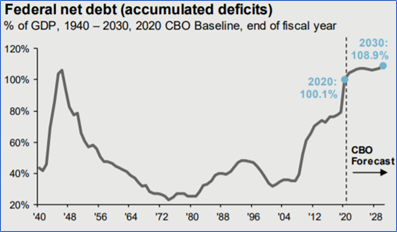 A new year is always a good time to take stock of our lives and to reflect on the past year; our successes, where we have fallen short of our expectations, and all we have to be thankful for. To think about our hopes, dreams, and goals for the coming year. Despite the challenges of 2020, we at EBW have so much to be thankful for. Our large EBW family is healthy and financially secure. We are also very thankful for you and the trust you have placed in us to help guide you through these trying times. We are humbled by the faith and confidence it takes to hear us even when your instincts may be telling you to run and hide. We are thankful for the heroes of 2020 - the medical professionals, first responders and front-line workers who took great care of us. And our thoughts and deepest sympathies are with the families of those who we lost to the virus. 2021 promises to be better, but we have a lot of work to do…..together. We need to heal our economy and mend our political divisions. We need to come together as Americans and celebrate all that makes our country great. I still believe our best days lie ahead, but like anything, it will take hard work and honest dialogue. We’ll need to shine the light as brightly on ourselves as we do on others. I will leave you with the words of Rumi, a 13th century Persian poet: “Yesterday I was clever, so I wanted to change the world. Today I am wise, so I am changing myself”. I wish each of you health, happiness, and success in the new year.

The content in this article was prepared by the article's authors. Voya Financial Advisors, Inc. makes no claims, promises, or guarantees about the accuracy or completeness of the contents.

Egan, Berger & Weiner is not a subsidiary of nor controlled by Voya Financial Advisors.

Neither Voya Financial Advisors nor its representatives offer tax or legal advice. Please consult with your tax and legal advisors regarding your individual situation.

The Dow plunged into a bear market in just 20 days — the fastest 20% drop in history | Markets Insider (businessinsider.com)

The Bear Market Is Here! Fastest Plunge Of 20% On Record (forbes.com)

US National Debt by Year Compared to GDP and Major Events (thebalance.com)