How do you know when you are rich enough? 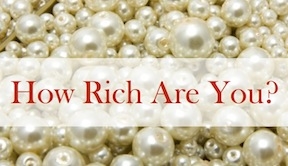 The Oxford Club, a private, international network of investors and entrepreneurs, has a singular mission: To grow and protect the wealth of its members.

So I love that its chief investment strategist, Alexander Green, is famous for asking the question that I often hear my clients ask: When are you rich enough?

Stop reading this article for a minute, and ponder this question for yourself. Pull out a pad and pen, or type on your favorite electronic device the three things that would make you feel rich enough.

Here are my three responses. I think you are “rich enough” if you:

While some are convinced that a person’s wealth can be determined only by their income, I would argue that you determine your level of wealth by looking at a balance sheet of your life—not just an income statement.

And if having a lot of money is important to you, then pay attention to you net worth. I believe that it is a far better measure of how rich you are than annual income, though a high income certainly helps.

Let’s look at the numbers.

A recent survey on consumer finances by the Federal Reserve shows:

So if you’re not “rich” now, how do you get there? I realize it is easier said than done, but follow these three approaches:

Most wealthy people are not big spenders. In fact, quite the opposite is true.

According to extensive surveys by Dr. Stanley, the most productive accumulators of wealth spend far less than they can afford to on homes, cars, clothing, entertainment, vacations, etc.

Although some people have a higher-than-average income, that alone does not make them rich. Many aspire to be wealthy but don’t achieve that goal for several reasons. They often buy expensive clothes, top-shelf wines and liquors, luxury cars, and all kinds of “bling,” and they often purchase more house than they can actually afford to.

Their problem, in essence, is that they’re trying to look rich, but that very strategy actually prevents them from ever truly becoming rich.

It may surprise you, but the vast majority of wealthy people in the United States:

Clearly, they are frugal. But they also report being very happy because they are not dependent on their families, employers, or the federal government for money. What a great feeling!

How to Protect Your Financial Plan

Finding Paradise: How To Locate Your Perfect Retirement Destination