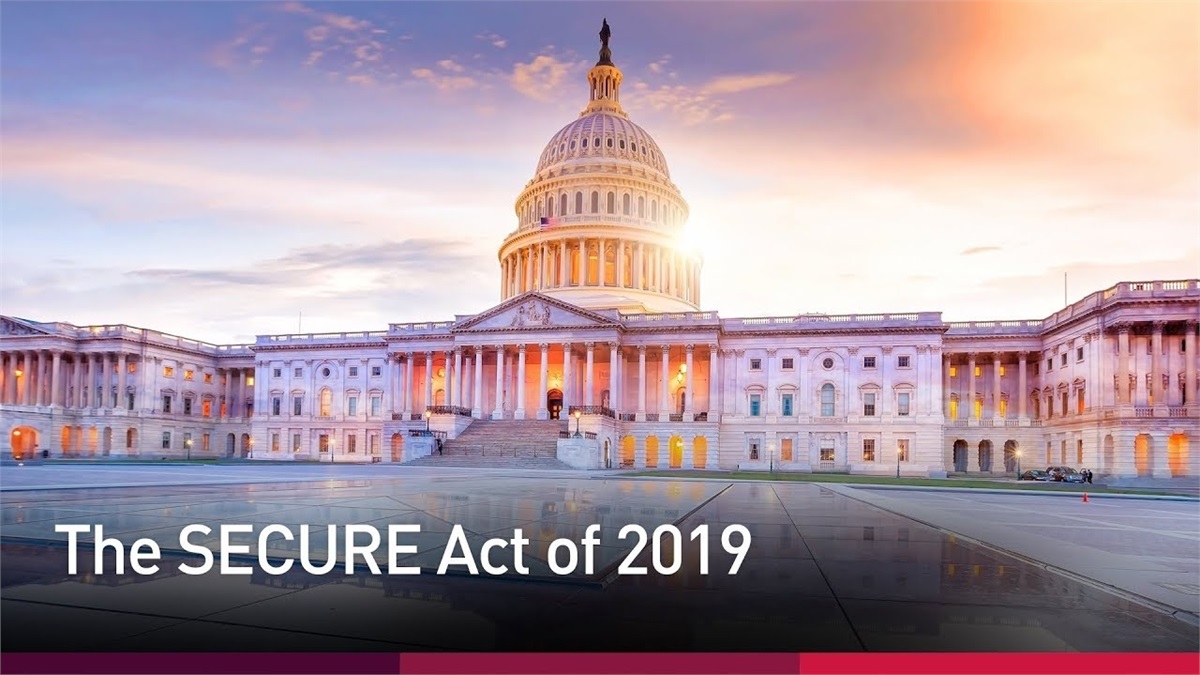 How Will the Secure Act Impact You and Your Retirement?

The “Setting Every Community Up for Retirement Enhancement” (SECURE) Act was signed on December 20, 2019. Many people will find both positive and negative changes in the new law depending on their particular situation. Below is a list of the changes that may impact our clients:

A major benefit of making pre-tax salary deferrals to certain retirement plans and/or contributions to traditional IRAs is that the account can grow through tax-deferred compounding growth. Since taxes are not paid on qualified retirement accounts until the funds are withdrawn, the Internal Revenue Code established a Required Minimum Distribution (commonly referred to as “RMD”) age at which individuals must begin taking an annual taxable distribution.

Before the SECURE Act, RMDs had to commence by April 1st of the calendar year following the year that the account holder reached age 70 ½.  The age to take RMDs has now been increased to 72 for anyone born after July 1, 1949. In the first year in which an individual reaches 72, he or she still has the option to delay the initial RMD to April 1st of the following year and have the RMD for the prior year and current year paid out by December 31st.

The prior RMD rule still applies to anyone who already reached age 70 ½ in 2019.

Note:Although it is not part of the SECURE Act, the IRS issued a proposed regulation on November 7, 2019 that will adjust the life expectancy tables used to calculate RMDs. The proposed tables recognize the increase in the average life expectancy and the proposal may impact the amount participants and beneficiaries must withdraw for their RMDs in the future. If finalized, the proposed regulation will not take effect until 2021.

beneficiaries.  For example, previously if an IRA or 401(k) was inherited by certain designated beneficiaries, RMDs could be extended over the beneficiary’s life expectancy. This was known as the “Stretch IRA.”

The SECURE Act changed the timing of beneficiary payments.  Unless a beneficiary falls within an exception, all funds must be distributed and taxes paid no later than the end of the tenth year. The SECURE Act did not alter the penalties for failure to take RMDs.

This change can have significant tax ramifications for estate planning. Individuals should review their beneficiary designations and discuss their strategies with their legal counsel and/or Financial Advisor.

The SECURE act repealed the prohibition on making non-rollover contributions to traditional IRAs after reaching age 70 ½ recognizing increasing life expectancies and that people are working longer.  Now, anyone over 70 ½ with earned income and, who otherwise satisfies IRA contribution requirements, can contribute to a traditional IRA.

The SECURE Act also reduced Qualified Charitable Distributions (QCDs).  Previously individuals could make direct tax-free distributions of up to $100,000 per year from an IRA to qualified charities to reduce their gross income.  Now the QCD limit is reduced by an amount equal to the excess of: (1) all IRA deductions allowed to a taxpayer for all taxable years ending on or after the date the taxpayer attains age 70½; over (2) all reductions to the exclusion based on post-70½ IRA deductions for all taxable years preceding the current taxable year.

The definition of a qualified higher education expense was also broadened to include expenses for fees, books, supplies, and equipment required for the participation of a designated beneficiary in certain apprenticeship programs.

Under previous law, an employer could exclude an employee from their 401(k) plan

if they worked less than 1,000 hours per year. The SECURE Act requires employers to have a dual eligibility requirement for participation in qualified retirement plans. An employee must either complete 1-year of service under the previous 1,000 hour rule, or 3 consecutive years of service where the employee completes at least 500 hours of service. An employer may still require an employee to be 21 years old before he or she can participate in the plan.

Participants in certain defined contribution plans, such as a 401(k), will now receive a lifetime income disclosure at least once per year pending the Department of Labor’s guidance on the lifetime income disclosure.  Benefit statements will show a participant what their monthly payment would be if their entire account balance was used to purchase annuities.  Please consult a Financial Advisor before choosing any type of lifetime income option to ensure it’s in your best interest.

The SECURE Act will allow participants in certain employer retirement plans to take a distribution of a lifetime income investment, without regard to the Code’s withdrawal restrictions, if the lifetime income investment is no longer authorized to be held under their plan. The distribution must be made by direct rollover to an IRA or other retirement plan or, in the case of an annuity contract, through direct distribution to the individual.

Plan Withdrawals for Birth or Adoption:

The SECURE Act permits plan sponsors to adopt a provision that will allow individuals to take a taxable  withdraw of up to $5,000 from their employer retirement account or IRA within 1 year of a qualified birth or adoption, without incurring a 10% early withdrawal penalty. The $5,000 limit applies on an individual basis, meaning spouses could each receive a distribution of up to $5,000 per qualifying birth or adoption to help cover the cost of starting a family. The SECURE Act also permits re-contribution of distributed amounts, but we are waiting on further guidance from the IRS regarding details.

We encourage you to contact your Financial Advisor if you have any questions about how the SECURE Act may impact your situation.