In William Shakespeare’s The Tempest, the dastardly Antonio implores Sebastian to kill his own brother, the King of Naples, by convincing him that “what’s past is prologue.” Antonio, who had 12 years earlier usurped his own brother, the Duke of Milan, by casting him and his young daughter out to sea in a rickety raft, certainly had a wicked way of fulfilling his political aspirations. As I write this and think about adjectives that best describe 2016, I just keep coming back to the word tempest – a violent windy storm.

With the worst start on record for the S&P 500, 2016 could certainly be described as having opened as a violent and windy storm. Amid a turbulent sea of Fed uncertainty, flagging oil prices, economic weakness in China and the first interest rate hike in a decade, by February 11th, the S&P 500 had lost almost 11% of its value. Things settled down quite a bit through spring and into early summer, as the market regained its earlier losses and even snuck briefly into the black. But this, as it turns out, would be the ‘calm before the storm.’ Much as Antonio convinced Sebastian to kill his own brother, Boris Johnson and his colleagues convinced the British people to kill their relationship with the European Union. In dealing a staggering blow to the political status quo befitting a Shakespearean drama, ‘Brexit’ also hit the stock markets like a tsunami. US stock markets declined by more than 5% in just four days, though they showed their resiliency by recovering shortly thereafter. International stock indices would never quite recover.

As echoes of The Tempest reverberated throughout the year, Antonio’s coaxing “what’s past is prologue” would prove to be amazingly prescient. As if merely the introductory act, setting the scene for the drama that lay ahead, ‘Brexit’ was only the beginning of 2016’s political upheaval. I am of course talking about Donald Trump’s staggering defeat of Hillary Clinton. Just after midnight on November, 9th, as polls across the country tallied their votes, stock market futures sold off by almost 900 points as the world came to grips with undoubtedly one of the largest political upsets of all time. In defiance of the experts and pundits however, U.S. stock markets managed to reverse course later that same day, with the Dow Jones Industrial Average rallying 257 points to close within striking distance of an all-time high. 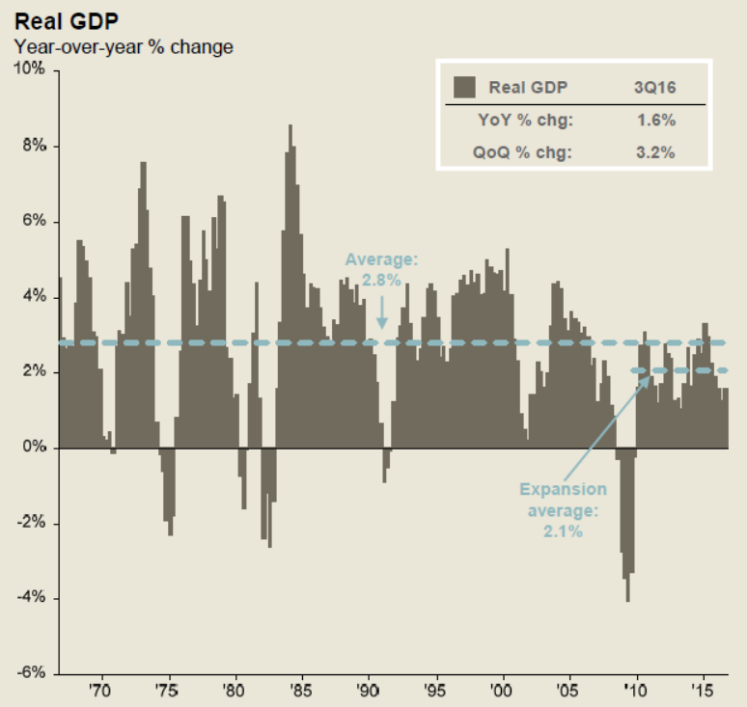 After President Elect Trump’s victory speech, the stock market seemed to look past some of his extreme positions and embrace the possibilities that his economic policies would help our economy. The stock markets would ride this tidal wave of optimism all the way to 2017 with the S&P 500 posting an impressive 12% gain for the year.

So, as I dispense with the high drama of a year that is certainly one for the history books, I would like to take a few minutes to discuss the economy.  While the U.S. economy really came alive in the third quarter, with gross domestic product (GDP), the value of all of the goods and services created, jumping 3.5% annualized, the year-over-year GDP growth is still a quite anemic 1.6%. GDP is an important indicator, as it helps to assess the health of the economy. Since the economic recovery began in 2009, growth here in the U.S. is 2.1%, well below the long-term average of close to 3%. Another important gauge of the economy is its ability to create jobs. The official unemployment rate in the U.S. stands at 4.6%, well below the 50 year average of 6.2%. But this doesn’t tell the whole story. The labor force participation rate, which is the percentage of the population 16 years or older who are employed or actively looking for a job, stands at 62.8% - its lowest since 1978. Some of this decline in the workforce can be explained by aging and retirement, but there are additional factors which point to continued struggles by some segments of the population to find adequate employment. The bottom line, however, is that the U.S. economy has created 15.7 million jobs since the labor market turned positive, compared to the 8.8 million lost during the recession. What’s more is that we’re beginning to see improvement in wage growth. At a 2.4% year-over-year growth rate wages are moving up, but growth is still below the 50 year average of 4.2%. While the Federal Reserve Bank (the Fed) felt comfortable enough to increase short-term interest rates by .25% for the second straight December, all indications point to continued low rates into 2017. With very low inflation levels, the Fed can take its time raising short-term interest rates, continuing to offer a boost to the economy. Longer-term interest rates, which are controlled by the forces of supply and demand rose considerably after the election. With investors’ insatiable appetite for risky assets such as stocks, demand for the safety of bonds plummeted, sending their interest rates higher. This caused mortgage rates to jump to their highest level in two years. 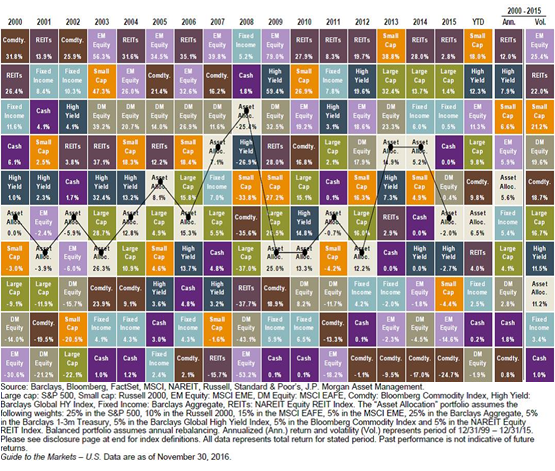 With respects to the stock market, the S&P 500 posted a 12% gain in 2016, but the gains were not felt evenly. While large U.S. dividend paying companies such as Verizon, Exxon and Caterpillar saw the most gains – up more than 18% - large U.S. growth companies such as Apple, Microsoft, and Amazon only saw their values increase by an average of 7%.  Smaller and mid-sized U.S. companies have also done quite well, up 21% and 14% respectively. This rapid appreciation of stock prices, without an accompanying improvement in corporate earnings, could be a warning sign that prices are getting high. Developed market international stocks turned in a lackluster performance, gaining only 1.5% for the year. Emerging market international stocks, such as those from Brazil and China gained 11.6%. This performance is in stark contrast to 2015, when emerging markets lost almost 14% and small U.S. companies lost a little more than 5.5%.  Bonds, as measured by the Barclay’s Aggregate Bond Index, posted a 2.65% gain for the year.

With 2016’s curtain call only a memory, the Dow seems poised to cross the 20,000 level sooner rather than later. As we approach this important psychological point, the question is whether this will be a smooth and continued rise, or will it be filled with uncertainty and periods of violent windy storms.

At the end of the Tempest, the Duke of Milan who was cast away to die by his own brother with the aid of the King of Naples, forgives and forgets the wrongs that were committed against him in the name of political aspirations and power. In 2017, let’s hope that we can take a lesson from Shakespeare and Prospero and heal the deep political divisions that were laid bare by a difficult election. Wishing you health and prosperity in 2017.