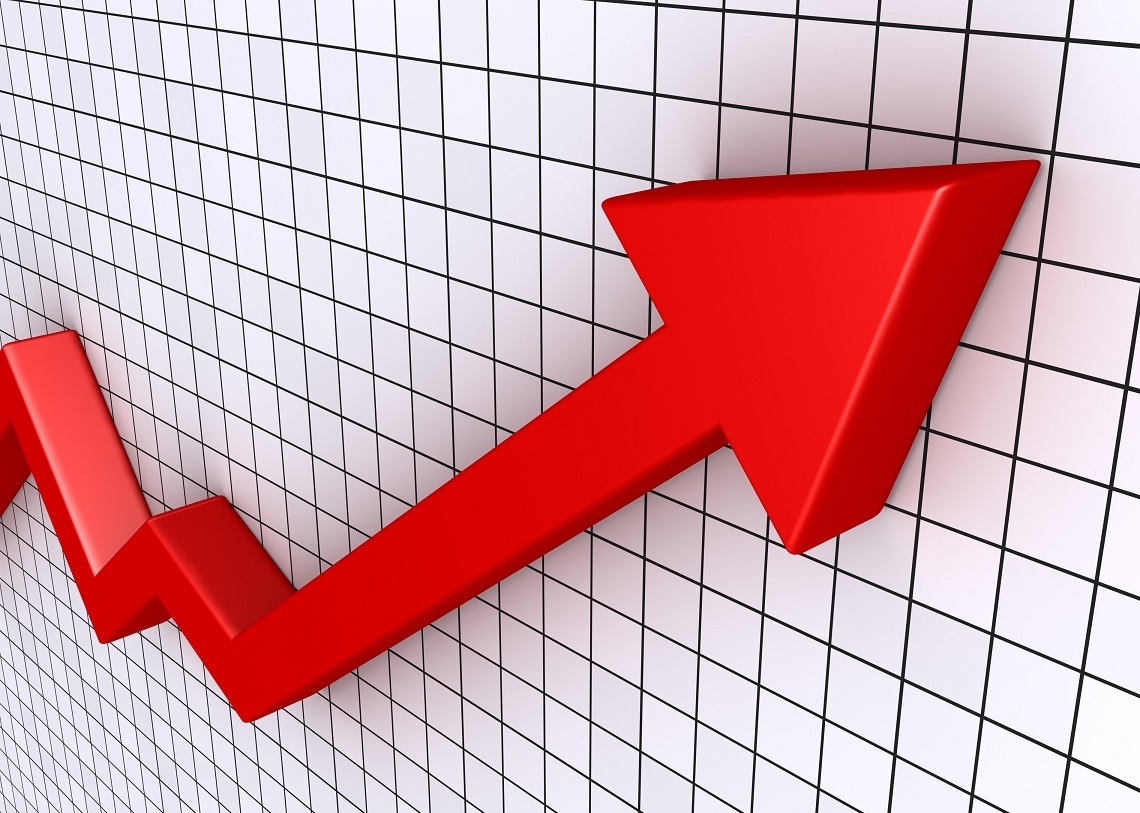 To many of us, this stock market rally seems like the most unloved in recent memory. Like the farm animals treated the ugly duckling in Hans Christian Anderson’s short story, many people jeered, ridiculed and were outright hostile to this rally. Some allowed their emotions to get the best of them and others may have been spooked by the constant drone of political bickering. But while Tweets and politics dominated the headlines, the global economy quietly transformed into a beautiful swan, enjoying broad-based improvement and helping to push stocks into record territory.

Building upon the considerable momentum created after the 2016 election, U.S. stocks, as measured by the S&P 500 gained just under 22%. 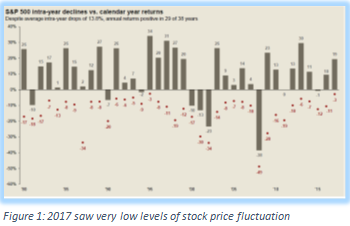 What’s even more remarkable is how little the market dropped during the year. In a typical year, the S&P 500 will decline on average about 14% at some point. Last year’s largest peak-to-trough decline was 3%.

Only the second time that has happened in 37 years.  Now THAT is something to Tweet or maybe quack about. How much of this duck’s transformation into a swan can be attributed to President Trump is open for debate, but clearly business has welcomed this change in leadership. While the only new piece of legislation came late in December in the form of the Tax Cuts and Jobs Act, Trump has offered significant regulatory relief to businesses that were, by their accounting, drowning in red tape.

The National Federation of Independent Business issued a report early in the year that stated “roughly half of all small business owners say regulations are a very serious or somewhat serious problem”[1].

According to an analysis from The Economist, President Obama penned 527 regulations deemed “significant” in his last year. In Trump’s first year, he issued 118, yet almost all of those were delaying or repealing Obama’s rules. The White House has acknowledged only a single new regulation[2].

While there is no empirical evidence that deregulation increases economic activity, clearly something is fueling the optimism in businesses, both large and small, across the country. If things go as expected, the economy should post a greater than 3% gain in the fourth quarter of the year, making it three consecutive quarters of more than 3% growth. The last time this happened was 2005! Further evidence of a more enthusiastic outlook.

In 2017 strong economic growth wasn’t just enjoyed here in the U.S., as all major economies across the globe were in on the action too, giving rise to the term synchronized global growth. While the U.S. stock market was up 22% last year, developed international markets, as measured by the MSCI EAFE index, rallied 25.62%, besting U.S. markets for the first time since 2012. The big winner last year, delivering an eye-popping 37.8% gain was emerging markets. Countries such as China, India and South Korea were the beneficiaries of strong global economies and a weaker U.S. dollar. 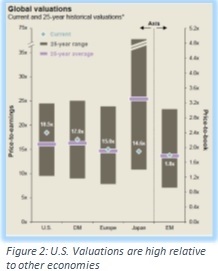 As we look at the stock market, one ongoing concern is valuation. After a near 300% rise in the S&P 500 since March of 2009, stock prices, especially here in the U.S. are starting to look expensive. We believe evaluating a stock’s price relative to earnings is one of the best methods for determining its value, and U.S. companies enjoyed strong earnings in 2017. As a multiple of earnings, the S&P 500 is trading at 18.2 times its current earnings. To put this in perspective, over the past 25 years, stocks have traded at an average of 16 times earnings.

By this measure, stocks seem to be slightly overpriced, but there is a weak correlation between these valuations and short-term market performance, so this is not a sign that a market sell-off is imminent. What these elevated valuations may point to is lower market returns over the medium-term. While the U.S. may be overvalued based on earnings, stock valuations abroad are more attractive, with most markets trading close to their 25 year averages. It is for this reason that we currently hold a slightly elevated position in international stocks.

The Federal Reserve Bank (The Fed) increased interest rates three times last year, following only single rate hikes in 2015 and 2016. As The Fed looks to normalize interest rates and “reload” for the next crisis, it is also signaling confidence in the economy and a willingness to combat inflation before it becomes an issue. These rate increases had a negative impact on bond returns, with the benchmark bond index notching only a 3.5% gain. Perhaps more notable, The Fed recognized the possibility of a stronger economy in 2018 by raising its expectations for economic growth by .4%.

As this rally enters its ninth year, it takes its place as the third longest since 1900[3]. Duration not withstanding, this rally is also among the weakest. With 2.2% average economic growth since the second quarter of 2009, it is far below the 50 year average of 2.8% growth. Other good news in 2017 included a continued decline in the unemployment rate, with the December numbers coming in at 4.1%, well below the 50-year average of 6.2%. 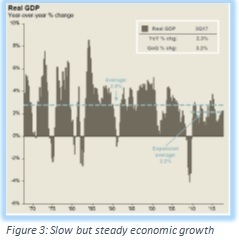 As further proof of how ugly investors think this rally is, many are still sitting on the sidelines. According to J.P. Morgan, $15.5 trillion is sitting in cash accounts[4]. This cash may provide downside protection as investors, uncomfortable with current price levels could be enticed to invest if stocks prices fall.

Regardless of the 24 hour news cycle, Tweets and continued deep social divisions, the markets have posted another strong year, providing further evidence that trying to “politics-proof” your investments can end up costing you. It’s true that this economic expansion is getting long in the tooth and the ugliness in politics will continue, but our ugly duckling has clearly matured into a beautiful swan and has found a home with other swans. Will this continue in 2018? Read more in Bryan Beatty’s take on our outlook for the coming year.

Neither Voya Financial Advisors nor its representatives offer tax or legal advice. Please consult with your tax and legal advisors regarding your individual situation

[2] “An Assessment of the White House’s Progress on Deregulation.” economist.com, October 14, 2017