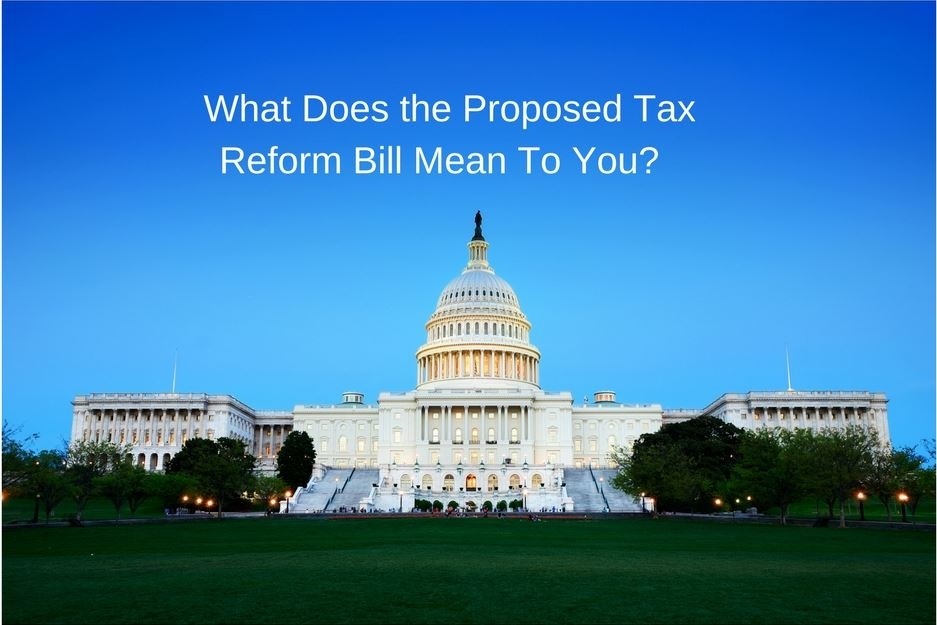 What is in the Proposed Tax Reform Bill?

On September 27, President Trump and Republican leaders finally released the latest version of their long-awaited tax reform package. As with previous proposals, the new plan promises to cut taxes for individuals and businesses, while wiping out deductions and repealing other controversial tax provisions.

We think it is important that you have an idea of what is being proposed.

Individual tax rates: Similar to prior proposals by Trump, the new plan replaces the graduated seven-rate structure with a three-bracket system of 12%, 25% and 35%. Currently, the lowest rate is 10% and the top tax rate is 39.6%. It’s not yet clear where all the income cut-offs would occur. Though the lowest tax bracket increases, the proposal doubles the standard deduction, effectively lowering taxes for most people who have incomes in the lowest bracket.

Corporate tax rates: Previously, President Trump had called for a top 15% corporate tax rate, down from its current 35%. Conceding that the math didn’t work, this version settles for a to 20% rate as an “opening bid.”

Pass-through businesses: As opposed to the current rules where entrepreneurs who own their own business are taxed as individuals, the plan imposes an across-the-board 25% rate for pass-through businesses. The plan also includes a prohibition against “personal income" being taxed at this rate.

Itemized deductions: Following through on previous pledges, the new plan eliminates most itemized deductions, but retains the “sacred cows” of write-offs for mortgage interest and charitable donations. This could result in lot of handwringing from residents of states with high income and property taxes.

Estate tax: If the new plan is adopted, the death of the federal estate tax, “or “death tax,” would finally become reality. Currently, the estate tax only affects the wealthiest taxpayers, due mainly to the availability of a $5.49 million exemption.

Family tax breaks: Without offering many specifics, the plan would consolidate existing tax breaks for families. A few notable changes would increase the child tax credit from $1,000 to an unspecified amount and create a new $500 tax credit for dependents, such as the elderly, who aren’t children.

Repatriation tax: A one-time repatriation would be imposed to have companies bring back profits from overseas. Trump administration officials have indicated the rate would probably be around 10%.

Some of the key elements of the tax reform plan were missing from the nine-page report released by the GOP leadership. The plan also leaves some decisions up to Congress, such as imposing restraints on wealthy individuals benefitting from the 25% rate for pas-through businesses and the possibility of a fourth individual tax rate, higher than 35%, to ensure that the rich pay their fair share of tax.

The Trump administration hopes to push through these tax reforms before the end of the year, but most pundits believe that to be overly optimistic. If sweeping tax reforms are, in fact, enacted, the conventional wisdom is that legislation isn’t likely to be signed until 2018.

(Neither Voya Financial Advisors nor its representatives offer tax or legal advice. Please consult with your tax and legal advisors regarding your individual situation.)