When It Comes to Bonds, Would You Rather Be Safe or Sorry? 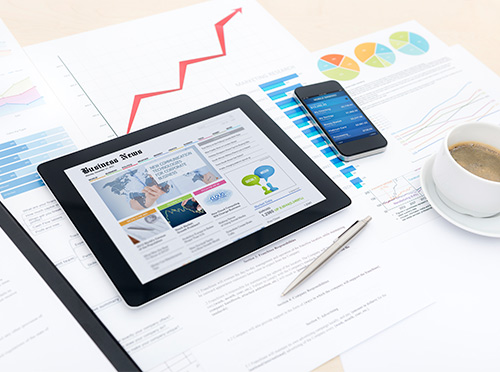 “Better safe than sorry.” How many times have you heard that old axiom?

Most of us likely heard this first from our mothers, and lucky for me, I recently had the opportunity to revisit the topic with my wife when discussing why I should wear a bike helmet. In some cases the “safe” course is blatantly obvious, but other times it isn’t as clear.

Since 2007, investors have poured almost $1.4 trillion dollars into bond funds; I presume this was done in an attempt to be safe. But are these investors truly safe, or will they be sorry?

Before we delve into the rather boring minutia of bonds, let’s set the stage by looking back over the past five years. In 2008 the stock market, as represented by the Standard and Poor’s 500 (S&P 500) dropped 37 percent. Since then, the S&P 500 has risen over 92 percent. With the benefit of 20/20 hindsight, one can see a tremendous opportunity.

The statistics indicate no, as many stock investors ran for the exits during this time and still have not returned. In each of the last five years, investors pulled money out of stock investments, to the tune of over $410 billion. Where did all this money go? You might have guessed it—bonds.

Viewed through the eyes of the typical investor, this makes sense: “Stocks are scary, so I’ll sell those, while bonds are ‘safe,’ so I’ll buy more.” But just like anything else, when there are more buyers than sellers, bond prices can be pushed to unrealistic levels.

Bonds are more complicated than most people think, but their prices are primarily determined by two factors: 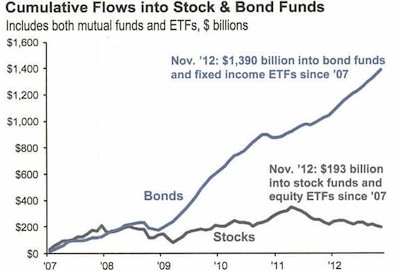 A bond is little more than an IOU. You loan some entity money, in return they pay you periodic interest payments, and at some point in the future, they pay you back your initial investment. It’s easy to see how the value of your bond would suffer if the issuer went bankrupt and couldn’t pay you back.

What’s not as easy to see is how the value of your bond would decline if interest rates rose.

Let’s look at a rudimentary example: Fred owns a $10,000 US Treasury bond that pays 2 percent interest. Since owning this bond, Fred has enjoyed receiving $200 in annual interest payments from Uncle Sam.

One day Fred wrecks his really expensive Cannondale road bike (good thing Fred listened to his wife and was wearing a helmet) and must buy a new one. He decides to sell his bond, but current bonds are paying 4 percent interest.

So bond investors have a choice. They can buy a new $10,000 US Treasury bond that pays them $400 a year, or they can buy Fred’s Treasury bond that will pay them $200 a year. Well, what would you do? Of course, $400 is better than $200. So Fred will need to lower the price he’s asking for his bond until the annual payments are equal at 4 percent.

Now that we understand this key relationship, let’s consider a real-world example. In 1994, while Olympic skater Nancy Kerrigan was nursing a sore leg and many of us were watching the police pursue O.J. Simpson’s white Ford Bronco across the California freeways, the Federal Reserve Bank (the Fed) was busy raising its target interest rate six times, handing massive losses to holders of existing bonds (see chart below).

The following passage from an October 1994 Fortune magazine article vividly entitled “The Great Bond Massacre” sums it up nicely:

“1994 became the year of the worst bond market loss in history. Since the Federal Reserve began nudging short-term interest rates higher in early February, the bond market has inflicted heavy damage on financial companies, hedge funds, and bond mutual funds. Fortune estimates that the rise in 30-year Treasury rates from 6.2% at the start of the year to 7.75% in mid-September has knocked more than $600 billion off the value of U.S. bonds.”

According to the Fortune article, the Fed raised rates by 1.55 percent. If the Fed raised its current rate of .14 percent to the 20-year average of 3.17 percent, it would have to increase rates by over 3 percent.

Considering today’s very low rates and the possible magnitude of change, it’s reasonable to think that 1994 could pale in comparison to the next “bond massacre.”

So the question isn’t if interest rates will rise, but when they will rise.

Your guess is as good as mine on this one. While the Fed has stated that its benchmark Federal Funds Rate will remain low for an extended period of time, the markets could push rates higher sooner.

Trying to time this rate change is likely a fool’s errand, and as they say in our field, it is like picking up nickels in front of a steam roller (not safe, by the way). I’m not suggesting you shouldn’t own bonds—far from it. I continue to advocate for a well-diversified mix of assets, including stocks, bonds, real estate, and commodities.

This mix of assets is the only way to address all of the risks that are present in our complicated financial system. What I am saying is that investors should not be over-exposed to bonds, and they need to be aware of the types of bonds they own and their sensitivity to changes in interest rates. In this respect, not all bonds are created equal.

Safety is a relative concept.

And when it comes to investing, focusing too much on one type of risk can leave you exposed to a different type. To me, the ending of this story is as obvious as the fate of this poor chap fixing his truck in the photo to the right.

At some point interest rates will rise from these historically low levels, and many of the investors who have overloaded on bonds, seeking safety—will instead be sorry.

3 Rules of Thumb for Investing

Why Are Asset Allocation and Investor Behavior at Odds — Again?