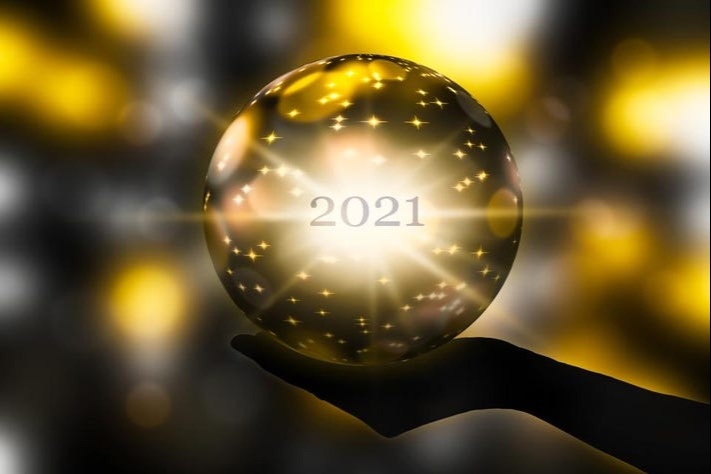 2021- A Totally Rad Year for the Markets

2021- A Totally Rad Year for the Markets

Anyone who knows me knows I love the 80s. I truly believe it was one of the best decades in our history. It was a time of relative peace and economic prosperity, there was a general sense of optimism for the future and a feeling that anything was possible. And the music, OMG! No other decade even comes close to matching the 80s in music, and I’ll fight anyone who thinks differently. Just ask my poor daughter who has to listen to me belt out 80s tunes while driving. Artists like The Smiths, Run DMC, Bruce Springsteen, U2, Michael Jackson and Madonna set the stage for everything that would come later. The decade hit a crescendo with the fall of the Berlin Wall and the Iron Curtain. Who can forget David Hasselhoff, on New Year’s Eve 1990, singing to both East and West Germans from atop the crumbling wall? Okay, we should all forget that, and it doesn’t help my “best decade for music” argument, but oddly, many Germans credit The Hoff with the unification of Germany.

I bring up the 80s not to wax nostalgic, but as a segue to the biggest economic story of 2021…..the return of inflation. Not since Ronald Reagan was President and Chariots of Fire won Best Picture, have we seen price increases the likes of those we are dealing with today. 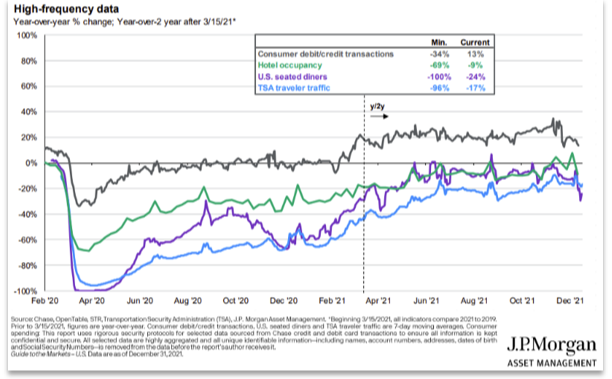 But before we get to that, let’s recap some of the top economic events of 2021. As we entered the year, a perfect storm of boredom and extra cash due to government stimulus made Game Stop a household name. Young investors locked inside due to COVID, who frequented a Reddit message group, decided to gang up on large hedge funds by buying up as much Game Stop stock as they could, while the hedge funds were betting heavily that the stock price would fall. This fight eventually pushed Game Stop share prices from $5 to nearly $500, despite a complete absence of fundamental reasoning (or sales, for that matter). This phenomenon would eventually hit other stocks, including AMC Entertainment and Blackberry, and gave birth to the term “meme stocks”.

As vaccines became more widely available people, resumed somewhat normal activities in the late spring. While COVID cases plummeted and we headed toward summer, the economy and society reopened and economic activity soared in the first half of the year, growing north of 6% for the first two quarters. Which brings us to another key theme of 2021: our strained supply chain. As consumers shifted their buying preferences away from services such as travel, dining out and theater toward material goods such as computers, home appliances and cars, manufacturers tried desperately to dig out of the hole created by COVID-related shutdowns. But as manufacturers made progress, it became clear that shipping containers were in all the wrong parts of the world. After sending PPE gear to countries that do not export goods, those same containers sat empty in ports across the globe. The result was that shipping costs blasted higher than Jeff Bezos aboard the Blue Origin rocket, and shipping delays mounted. As shipping eventually increased, local ports were overwhelmed and unable to handle the volume, leading to backups and a record 84 ships anchored in the waters outside Los Angeles, the US’s busiest port. Once the containers were unloaded, a shortage of truck drivers created a further bottleneck on the way to market. Consumers, dismayed to find empty shelves in stores and a lack of goods, reduced their spending yet again and economic growth in the third quarter was an anemic 2.3%. The shortages led to price increases across the board, including used car prices – which rose a staggering 25% in 2021. Who would have thought that my wife’s Subaru would be one of our highest-appreciating assets? 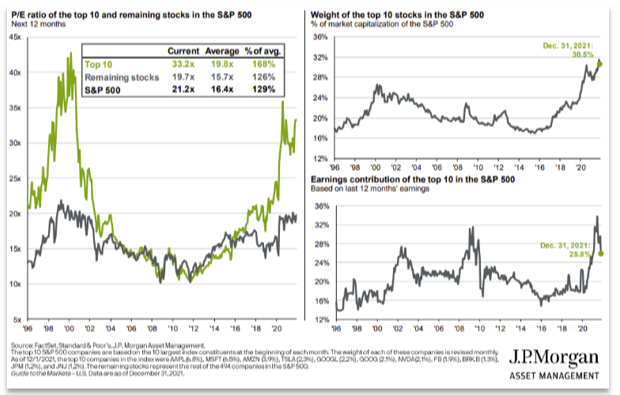 Speaking of the S&P 500, the US stock index hit all-time highs 67 times during 2021 and finished up just north of 28% for the year. This performance bested small companies, whose stock prices rose a bit more than 14%, and developed international stocks –such as those in countries like Japan, Germany, and France –whose prices rose a bit under 12%. Also, during the year the weighting of the top ten stocks in the S&P 500 rose to a record of almost 32%, levels not seen since the tech bubble of the early 2000s. Meanwhile, the valuations of those ten stocks reached 168% of their long-term average. While it is hard to say what this all means for the immediate future, it is worth noting that more of the S&P 500’s returns are being driven by just a handful of companies whose prices are very high relative to their earnings. The weakest stock performance during the year was delivered by companies located in emerging international economies such as China, India, Brazil, and Russia. The index that tracks these stocks lost 2.2%. While many emerging economies saw tremendous growth, a regulatory crackdown in China, as part of the Communist Party’s Common Prosperity plan, combined with tensions along the Ukraine border and the challenges India continues to face with COVID, led to losses for the asset class. Bonds and other fixed income securities also lost money last year as inflation fears and interest rates took a toll. A hypothetical, moderate-risk, diversified investment portfolio returned about 13%, excluding fees.

But, as I said, the big story of 2021 was inflation. Once relegated to the back of financial journals only nerds like me read, Google searches for the term almost tripled as this misunderstood financial term dominated headlines. While economists will debate the reasons, the fact is that prices for the things we buy have risen considerably over the year. Technically, inflation is the loss of purchasing power of a currency. A currency’s value lies in what you can purchase with it, and inflation reduces the goods and services which can be bought. Price increases can come from a scarcity of goods (such as an issue with the supply) or from the demand side of the equation, when consumers want more of a good than can be produced. Currently, we are experiencing both. Consumers, flush with cash and nothing better to do, are buying lots of stuff while store shelves are bare, and the supply chain struggles to keep pace. At the same time, labor shortages have pushed wage growth to 5.9% in November, much above the 4% average. 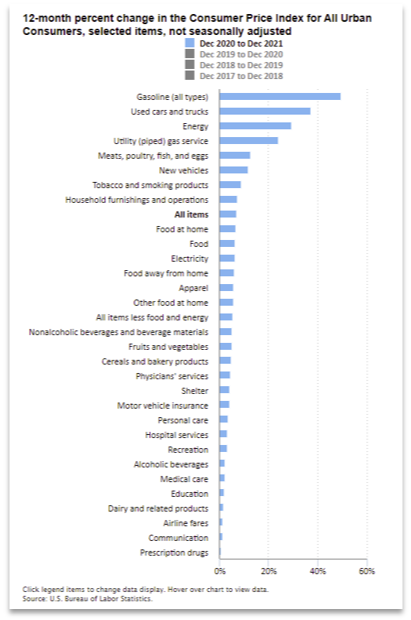 The Consumer Price Index, or CPI, is a basket of goods and services meant to approximate the costs of living. CPI prices are compared to prior periods, in an effort to understand how prices change over time. Said another way, the CPI measures what you can buy with your money. We have been very fortunate to live in a period of low inflation, thanks to Paul Volcker, the Federal Reserves’ chair in the 80s, who broke the high inflation of the 70s. Average annual inflation from 1995 through 2020 had been about 2.1%. So, something that cost you $1.00 in 1995 cost you $1.83 in 2020. That’s not so bad. However, the most recent readings of CPI show prices are rising at a 7% annual rate. This is the highest reading since E.T. was trying to phone home (just one more reference to show you how awesome the 80s were). While numbers like this can be scary, don’t confuse what we are experiencing now with what we experienced in the 70s. During that period, economic growth stagnated while prices rose dramatically, leading to what economists termed “stagflation”. Today, US household net worth is at an all-time high and the consumer debt ratio is close to its lowest point in 40 years. Unlike the 70s, our economy is poised for growth and any weakness in economic activity stems from a shortage of goods, not a lack of desire to buy those goods. There are also counter-inflationary forces such as robotics and the digital economy, which may help to bring prices down.

As the supply chain heals, it is our view that the big inflation numbers we’re seeing will recede. However, we do see inflation running hotter than the 2.1% we’ve been enjoying. From 1913 to 2020, inflation has averaged 3.1%; it is possible that we’ll be closer to the average, perhaps even slightly higher for some time. Higher wages and the increase in our money supply are inflationary forces. 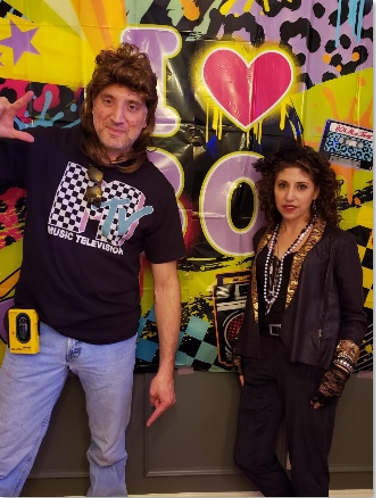 The good news for everyone is that we are not going Back to the Future. Doc Brown’s DeLorean time machine will not return us to the age of legwarmers, MTV, Family Ties and persistently higher prices. Let’s be honest, no one wants to see me with a mullet again. As evidence, I offer this picture of Erica and I at the 80s themed New Year’s Eve party we threw a few years ago. You’re welcome! We are turning a corner in the pandemic; we’ve come so far in the last two years, and I truly feel 2022 will be a great year. I wish you good health and happiness in the coming year. For more on our 2022 outlook, be sure to read Bryan Beatty’s piece.

The views stated are not necessarily the opinion of Cetera Advisor Networks LLC and should not be construed directly or indirectly as an offer to buy or sell any securities mentioned herein. Due to volatility within the markets mentioned, opinions are subject to change without notice. Information is based on sources believed to be reliable; however, their accuracy or completeness cannot be guaranteed. Past performance does not guarantee future results. Investors cannot invest directly in indexes. The performance of any index is not indicative of the performance of any investment and does not take into account the effects of inflation and the fees and expenses associated with investing.