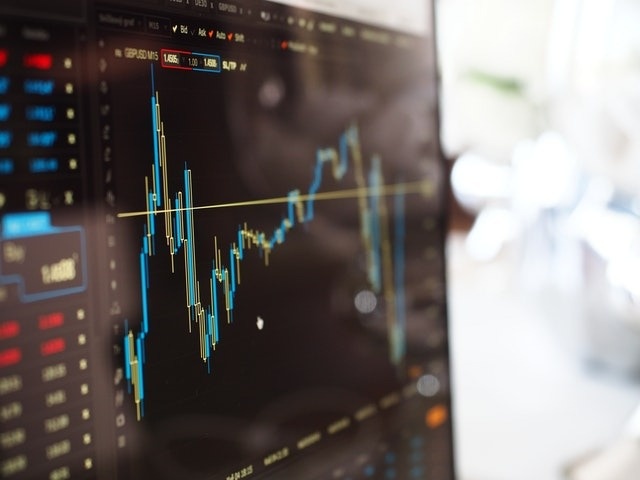 From Your Advisors at EBW: A Look Ahead Into 2023

Recession On The Horizon

Manufacturing activity is showing the slow down being created by financial tightening that the Fed has been engaged in for the last 9 months. It is likely we will go into a recession in 2023. It is important for investors not to conflate the economy and the stock market. Stocks begin to climb in the middle of the recession most of the time. The reason is that companies have been cutting expenses which include laying off employees. Corporate earnings estimates have been downgraded multiple times in 2022. Earnings are going to start beating expectations. Ultimately, it is earnings that drive stock prices. 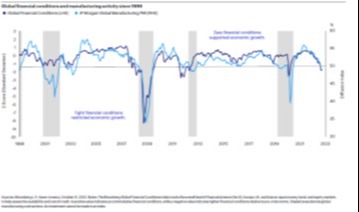 Central banks all over the world are tightening credit conditions simultaneously. This has created a tremendous headwind for equites and bonds alike. The good news is that we are likely close to the end of this rate hike cycle, sometime in the 1st quarter. Just a pause will likely give stocks a short-term boost. If we get a recession, then central banks are likely to ease rates. I do not think the interest rates will go anywhere near where the cycle began. When we stated raising rates the 3-month T-bill was at 0.0% and the 2-year T-bill was at .39%. As of the end of 2022 the 3-month is about 4.5% and the 2-year is at about 4.75%. 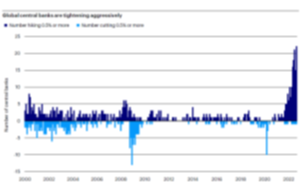 About 18 months ago we began pulling in our bond durations (shorter maturities) to protect as best we could against rising rates. Good news is we are very close to extending our duration again to take advantage of these new higher rates. 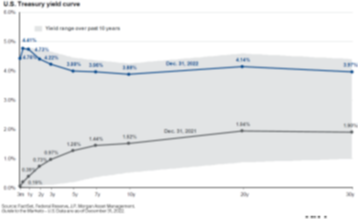 This bodes very well for bonds in 2023. Bonds have some of their best performance at the end of the rate hiking cycle. Though rates are likely to fall in a recession they can’t fall very far because of the sticky inflation. Bond rates have an imbedded inflation expectation premium built in. 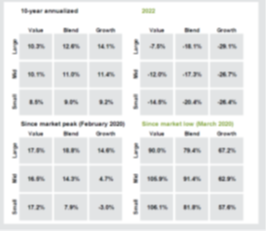 Last year saw a significant difference in price decline for growth stocks compared to value stocks. The primary driver is the fact that value stocks typically pay a dividend to the investor and because of their positive cash flow are less likely to need to tap the capital markets by issuing new bonds or trying to get a loan at these higher interest rates. Conversely, growth stocks rarely pay dividends and are heavily reinvesting in order to grow the business and their need to raise capital at these higher rates mean that some companies will falter. This affects the entire universe of growth stocks. We are going to have an opportunity to rotate back into the lower growth prices for change in the rate cycle that should favor growth at these new lower prices.  Growth presents a compelling price to earnings level that we haven’t seen in a few years.

The Consumer sentiment drops to its lowest reading since we have been measuring it. The average return in the subsequent 12 months after a significant plunge in consumer sentiment is 24.9%. We may be in for quite a bounce from our 2022 lows if history is our guide. 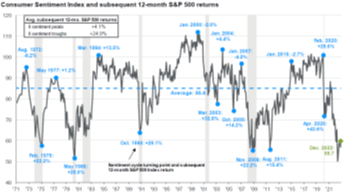 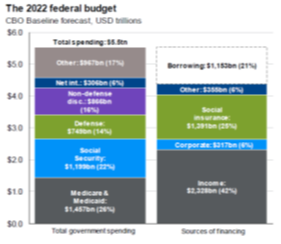 When 2022 began government interest payments were 6% of the budget at $306 billion. By the end of the year the debt service grew to $442 billion and 8% of the federal budget. Most of the debt that has been issued in the last several years was on low interest short term rates. These will be refinancing. Just like an ARM (adjustable-rate mortgage) that caused stress in the housing markets in 2007-08. The debt will force hard decisions on government spending right around the corner. 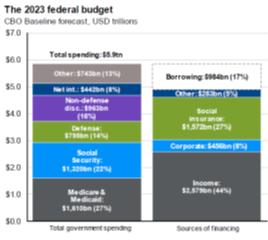 Don’t be surprised how fast that worm turns. Any cut in the government budget will be welcome news to the private sector economy that doesn’t directly benefit from government largesse. Those businesses in the private sector no longer must compete with government spending. This provides clarity for them to invest in their own business. This could boost growth in the coming years. 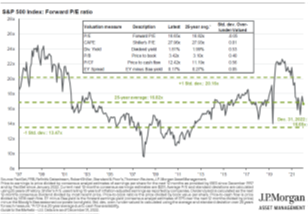 After valuations of stocks reached levels not seen since the dotcom bubble of the late 90’s, stocks are now reasonably valued. With expectations significantly diminished in the wake of the 2022 sell off this has the potential to make for a great backdrop for equities in 2023.