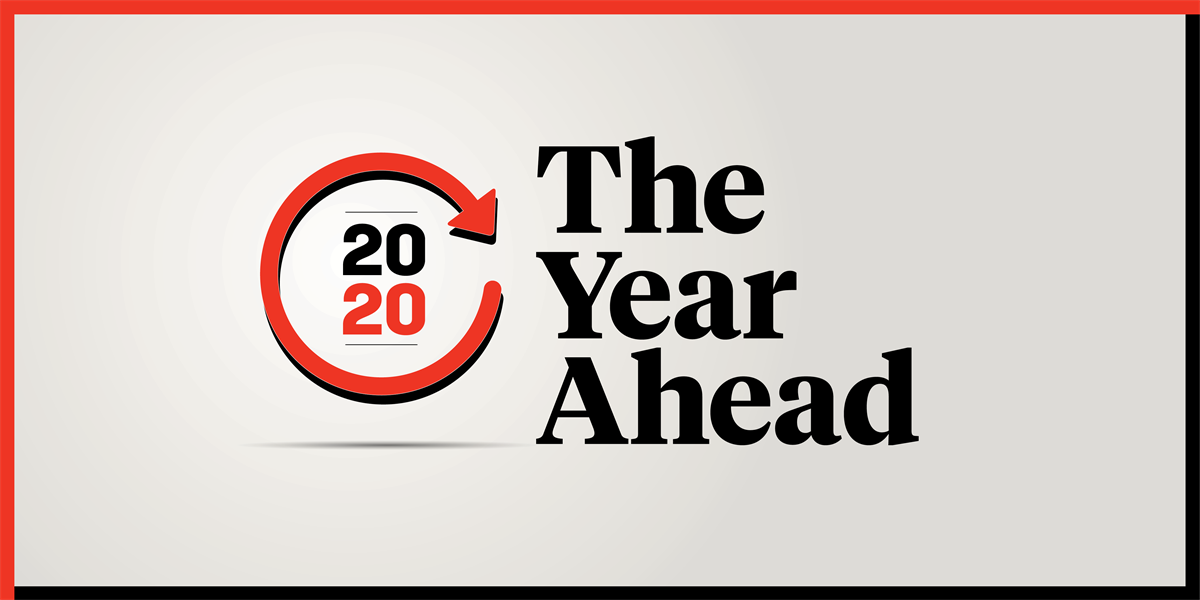 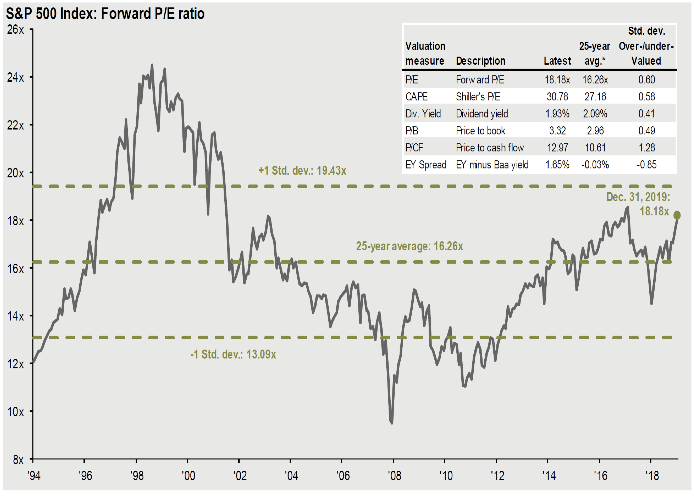 The current economic expansion is in its 11th year and doesn’t appear to be ending just yet. Inflation remains sanguine and there does not appear to be any asset bubbles. The FED reversed course on interest rates in 2019 in response to the global bond market and negative interest rates overseas.

Earnings are expected to accelerate in the second half of 2020 based on consensus forecast. Price to earnings ratios are slightly elevated from the 25-year average level of 16.28 at 18.23. We wouldn’t be surprised to see some pull backs in early 2020 as investors wrestle with the continued impact of the trade war and the concerns over geopolitical instability. If earnings do accelerate, as expected in the latter part of the year, we could be looking at higher prices for stocks again in 2020. I wouldn’t expect a repeat of 2019, but it all depends on earnings. It may very well be the consumer takes over and drives this late cycle expansion.

Slow and steady growth with low inflation should allow the expansion to continue in 2020.

The Fed and Interest Rates

As the central bank of Japan and the ECB use negative interest rates to try to stimulate short term growth, the US Federal Reserve has had to stop their tightening cycle and reverse course to create liquidity and respond to global bond market pressure. 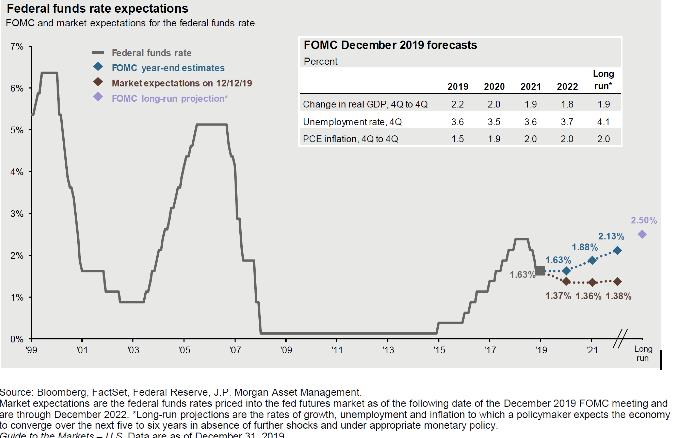 The Federal Reserve is somewhat trapped by the large deficits the US Government is running. Banks have a much higher reserve requirement under the Dodd Frank rules and the FED has had to provide help funding in the overnight lending markets providing fresh liquidity. We will continue to pay close attention to the overnight REPO markets (as they are known) to see if there are other issues in the credit markets. 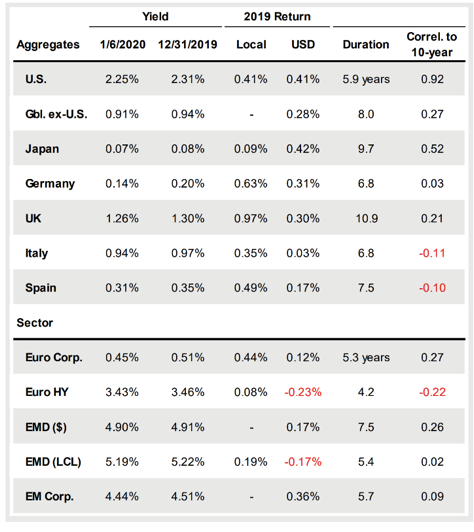 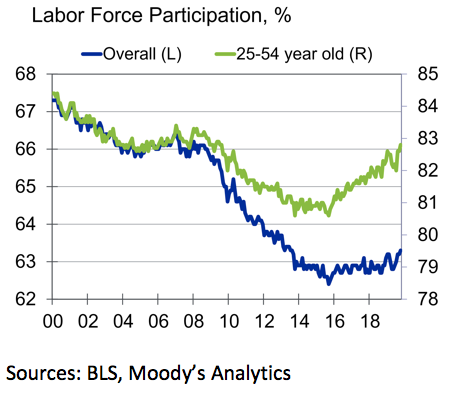 Labor force participation for those in the 25-54-year-old demographic has finally reached its pre-crisis levels after more than a decade. The overall numbers are still feeling the effects of an aging and retiring or marginalized work force.

Wages Rise Strongest at The Bottom of the Labor Market 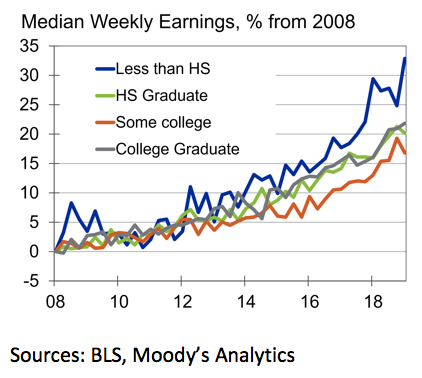 Wages for those with less than a high school education are finally rising faster than other wages. This level of wage earners is less likely to save the extra money earned, but rather increase their standard of living and therefore increase their consumption.

The Return of The Consumer 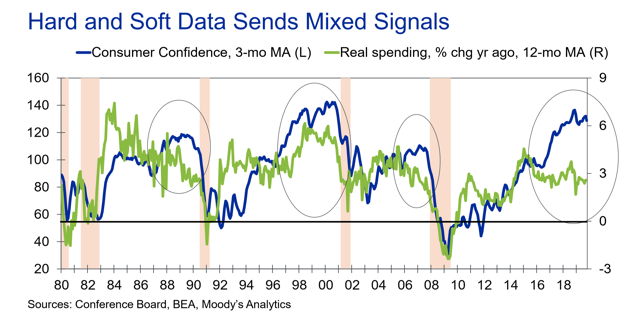 Though the consumer confidence numbers are up the spending doesn’t match the enthusiasm. There could be a variety of reasons for why the aggregate consumption trails the confidence numbers. Part of that could be related to rising student debt and the slow starting millennial's. Part of the reason for muted consumer behavior may also be explained by the perception of conditions in the economy. This is partly fueled by the Balkanization in the country (see political divide chart). 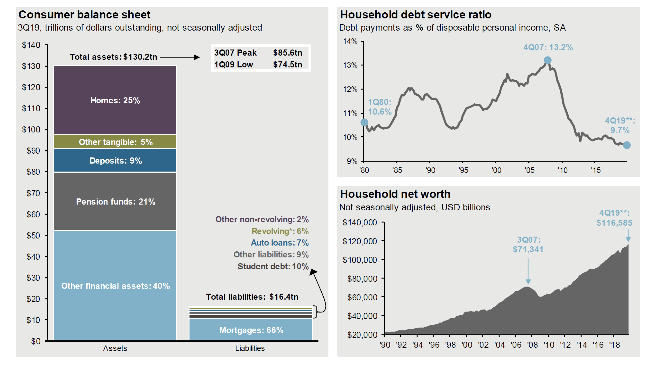 The consumer nonetheless has it’s best balance sheet in more than 40 years. This can easily lead to a return of the consumption habits of the past.

The average credit score should loosen the further we are from the credit crisis of 2008. This would begin an expansion of consumer credit that thus far has been absent from this recovery.

The trade wars with China and to a lessor extent the EU, continues. The effects of the trade war have created a muted growth scenario and stress in the emerging markets especially the currencies in the region. It has also slowed China’s growth and have knock on effect in Europe and specifically Germany where the have entered contraction in the manufacturing sector.

We believe that effects of the trade war persisting are priced into the market and should a resolution, however small happen, it would be a positive for stocks in 2020.

Politics and A Divided Nation

America remains a deeply divided nation politically. It is possible that we are seeing two different realities.  On the aggregate most voters see national economics as positive. Depending on your information sources you may see things very differently from your neighbor. 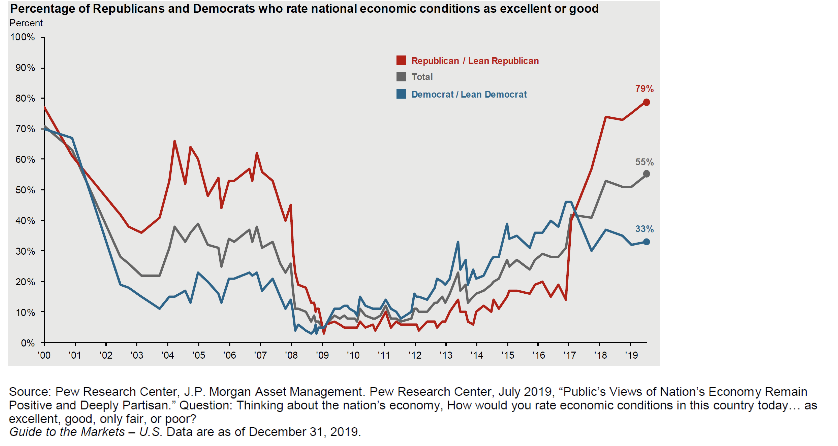 At some point we will have to recon with the growing debt and deficit problem driven mostly by our aging population drawing Social Security and Medicare benefits (51% of all spending). For now, the markets can discount these risks, but at some point, it will affect interest rates and equity markets. It is nearly impossible to know when that time will be. There doesn’t seem to be a collective concern in the political arena to bring the fiscal house in order. 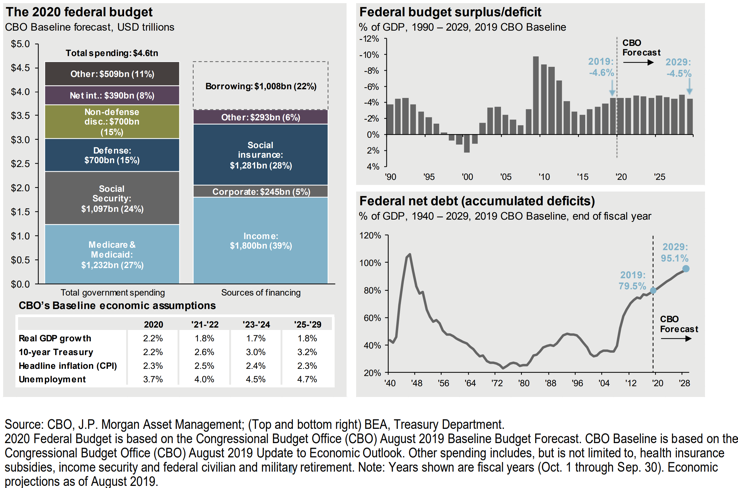 As for the elections, it is anyone’s guess right now. It is unlikely that the Democrats will win the US Senate as the number of available seats up do not favor the Senate changing hands and the House is a close call. It doesn’t usually do us too much good to try to plan a portfolio for an unknown political outcome.

There are several hard-left candidates polling significantly high enough to give free market and pro-business advocates some indigestion. We have problem with debt and deficit, and the proposals being put forth would exacerbate the big picture on debt going forward.

We will pay much more attention to the election at the end of the primary season. This could amplify the volatility of stocks and markets in the 2nd half of the year.