By January 2019, many so-called experts had already written the economic expansion’s epitaph. Even those who hadn’t gone so far as to predict its demise had clearly written off 2019. Some had solid reasoning for doing so – certainly there were headwinds. Others perhaps were distracted by the noise that seemed to be coming from all around us. Last year the commotion was as loud as it was relentless; I mean how is it possible that a year which gave us protectionism, trade wars, impeachment and the longest government shutdown in U.S. history also gave us the best stock market returns since 1997? Perhaps the market is just good at tuning out the noise. 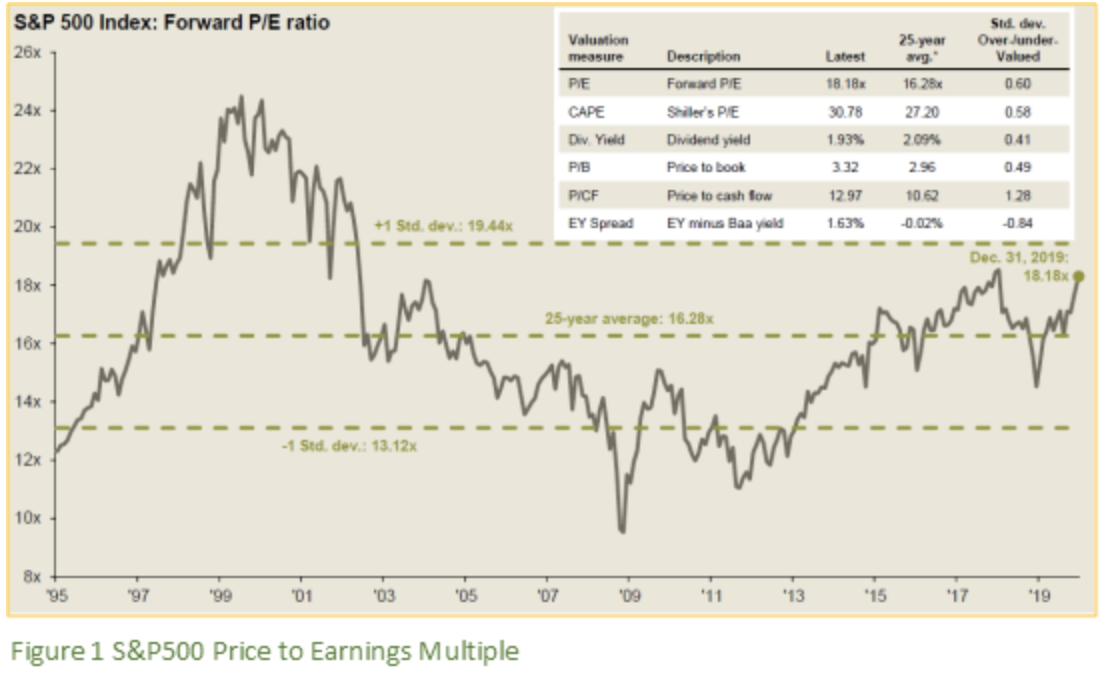 In 2019, the S&P 500 managed to hit all-time highs 34 times. As the year progressed and the markets continued their upward march, the calls of the expansion’s demise only grew louder as ominous clouds gathered over the bond market. Thanks to the media and its ever-present alarm bells, everyday folks were treated to the complexities of the yield curve, a mind-numbing sleep aide typically reserved for us geeky economic sorts. To hear the case for recession as told by the noise makers, recessions have occurred all four times since 1982 that the yields of short-term bonds have been higher than the yield of long-term bonds (a yield curve inversion) – a very high correlation indeed. The challenge comes in interpreting such a limited set of data and trying to divine such wisdom by excluding all other available data sets. Would you be surprised to know there is a very high correlation between per-capita cheese consumption and the number of deaths by entanglement in bed sheets?[1] To my knowledge, no one is mounting a social media Save the Sleepers! campaign by boycotting Gouda. To be sure, the yield curve is a very important piece of data, but it’s important to keep it in perspective and to also consider that the average time between inversion and recession is 18 months.

U.S. economic growth wasn’t spectacular in 2019, coming in at about 2% year-over-year. Further, corporate earnings were likely flat to only slightly positive. One large contributor to the outstanding 32% return of the S&P 500 index is what’s known as multiple expansion. An important piece of data is called the price-to-earnings multiple or P/E ratio. This describes the relationship between the prices of stocks and the earnings generated by the companies and is a good measure of how cheap or expensive a stock – or in our case an index – is. Entering 2019, the P/E ratio of the S&P 500 was 14.5. This means that investors were willing to pay $14.50 for each dollar of earnings generated by the S&P 500. Over the last 25 years, the average P/E ratio is 16.28. So, entering 2019, after the nearly 20% decline the S&P 500 suffered in the final quarter of 2018, stocks were pretty inexpensive. Recognizing that stocks were cheap, savvy investors were anxious to snap them up at bargain prices. Today the P/E ratio is 18.18, or almost $2 more than the average. While this is not yet cause for concern, it does call into question how much higher the markets can go without growth in earnings. It’s also worth considering that with bond yields as low as they are, investors looking to make money don’t have many alternatives, other than stocks. This could help to push the P/E ratio even higher.

Overall, U.S. consumers and households had a great 2019. With consumer spending accounting for 68% of economic activity, it’s important that we buy baby buy! Thanks to 50-year lows in unemployment, consumers did just that, in what turned out to be the bright spot in economic activity. It turns out we had good reason to be optimistic; U.S. household net worth hit an all-time high in 2019 and the U.S. household debt service ratio is at lows not seen since bell bottoms were all the rage and the Bee Gees boomed from your 8-track[2]. 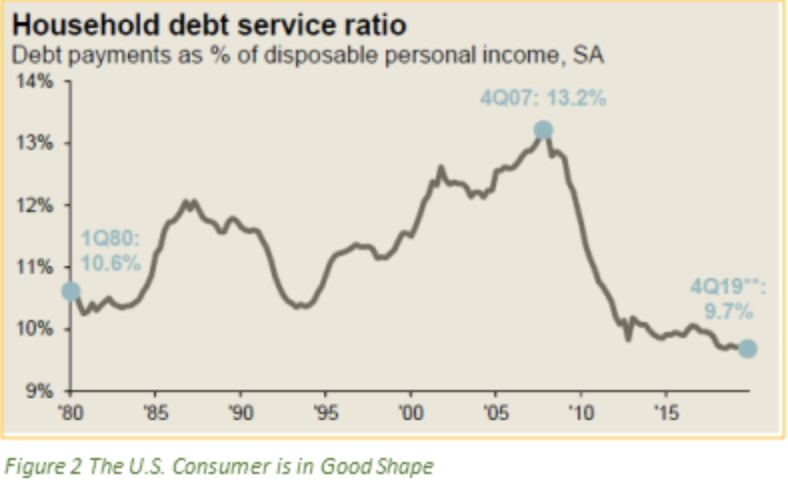 Another major contributor to 2019’s exciting returns were the world’s central bankers. Entering 2019, The U.S. Federal Reserve bank (the Fed) had raised rates four times the prior year and signaled that more increases were likely. As the data began to show a slowing U.S. economy, coupled with a slowing global economy, the Fed cut rates 3 times. Lower rates mean money is cheaper to borrow, which makes investments less expensive, which encourages economic activity. In efforts to stimulate growth, central banks around the globe also aggressively cut rates, leading to a record $17 trillion of negative-yielding debt. Can you imagine investing where you’re essentially assured of losing money? The extreme demand for a safe place to store money amid the heightened tensions around the globe led to 1/3 of the world’s bonds returning less than invested. As 2019 wound down, investors received welcome relief on several of the big issues that had been weighing on the markets. Great Britain overwhelmingly voted for Boris Johnson and his plan for exiting the European Union. While much work lies ahead for the UK, this vote did remove some of the uncertainty surrounding BREXIT. President Trump announced that a Phase One deal had been worked out with China, reducing some of the existing tariffs in exchange for larger purchases of American goods. The devil is the details as they say, so we’ll need to see what the final agreement holds and what enforcement mechanisms are built in. In early December, the House of Representatives passed the USMCA, a trade agreement between the U.S., Canada and Mexico; the new trade deal to replace the 25-year-old NAFTA clears the way for trade between the three nations.

Sadly, evidence suggests that many individual investors missed out on 2019’s stock market rally. Data shows that U.S. equity mutual funds saw net outflows of $61 billion dollars through November[3]. This is after $4 billion was withdrawn in 2018. Interestingly it seems that one’s political affiliation has a significant effect on their perception of the economy. As the divide between the political parties gets ever wider and the noise even louder, many people are making investment decisions based on their personal biases. This is a costly mistake and illustrates how personal feelings can cloud one’s judgement despite data and evidence to the contrary. As the noise gets louder and louder, it is important to try to tune it out and focus the data. 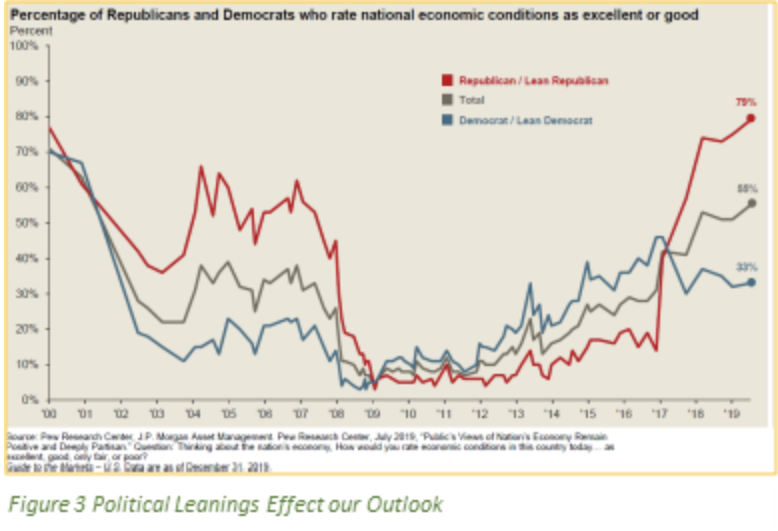 If you would like to know what 2020 has in store for us, aside from endless political attack ads, read Bryan Beatty’s 2020 Outlook.