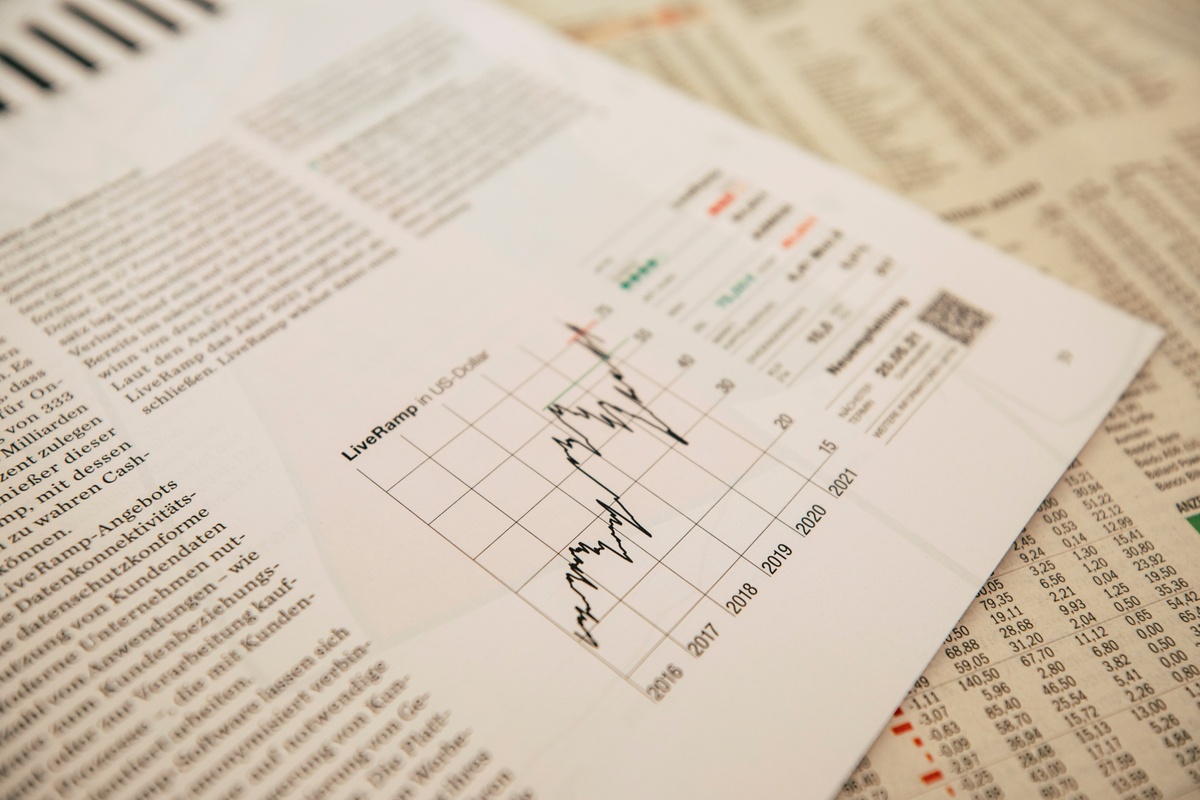 From Your Advisors at EBW Financial Planning: 2022 Year End Review

I Think We’re All Just Fed Up!

Hi, and welcome to 2023! I don’t know about you, but I feel like 2022 went by pretty quickly. In so many ways 2022 was a great year, but it certainly was a rough year for global markets and the economy. If the return of inflation was the biggest financial story of 2021, 2022 was all about how the Federal Reserve Board (The Fed) has responded to higher prices by pushing interest rates up, up, up. The resultant slowing of our economy seems to have made a lot of folks a touch gloomy, or maybe we’re just Fed up. Before we get into all of that, let’s review some of the economic events of last year.

The year started on a very optimistic note. In January we all celebrated record Household Net Worth, and the S&P 500 was at record highs. Things really looked to be going our way. As January continued, concerns about Fed policy and tensions growing along the Ukraine border put pressure on global stock indexes, eventually pushing the S&P 500 down more than 10% and into correction territory for the first time since early 2020. Exacerbating the nerves of a world already on edge, Vladimir Putin invaded Ukraine on February 24th, bringing a ground war to Europe for the first time since 1945.

In February, the Los Angeles Rams edged out the Cincinnati Bengals in Super Bowl LVI. However, many dubbed 2022’s Super Bowl the Crypto Bowl, as so many cryptocurrency companies bought airtime, at upwards of $7 million for a 30-second spot. A-list celebrities like Larry David, LeBron James, Tom Brady, and Matt Damon hawked these risky investments to an uneducated audience. How did crypto perform you ask? Well Bitcoin, the most well-known of the cryptos, lost more than 64% of its value.

In March, The Federal Reserve Board raised interest rates by .25%, or 25 basis points (bps), the first increase to the Federal Funds Rate since 2018. In May, the Fed raised rates by an additional 50 bps. Then in June, as the S&P 500 entered bear market territory (defined as a decline of 20% or more) The Fed announced a whopping 75 bps increase, the largest hike since 1994. Later in June, the Consumer Price Index (CPI), a widely used measure of inflation, blew past 9%, a pace not seen in over 40 years. Sadly, things only got worse for investors, and the S&P 500 continued its decline, marking the worst first six months of the year since 1970. 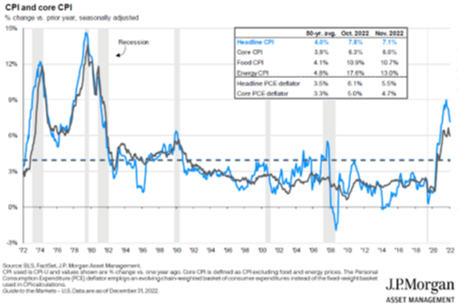 With inflation consistently coming in much above The Fed’s preferred level of 2%, the Board continued raising interest rates throughout the year, eventually raising rates seven times in 2022, including four 75 bps increases. The Federal Reserve Board has two primary responsibilities-  maintain stable prices (keep inflation low) and maintain maximum employment. They achieve these through monetary policy: when they fear the economy is overheating, they raise rates to slow things down; when they want to stimulate the economy, they lower rates. They can also inject or withdraw cash from the economy in support of their goals. As inflation surged to 40-year highs in 2021 and into 2022, the Fed Funds rate remained at 0% and, curiously, The Fed was still injecting billions of dollars of cash into the economy. They finally stopped in March and immediately began their aggressive rate hiking campaign. 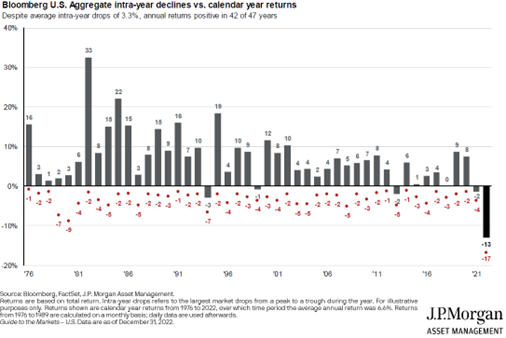 The S&P 500 would finish 2022 down a bit more than 18%. That the stock market finished down is not in the least bit remarkable –historically, stocks decline one out of every four years. What was remarkable about 2022 was how poorly bonds performed. The Bloomberg U.S. Aggregate Bond Index measures the prices of U.S. bonds. It is to bonds what the S&P 500 is to stocks. In 2022, the index lost 13% of its value. Prior to last year, the largest year-over-year decline the index experienced was just 3%. The largest intra-year decline the index ever experienced was in 1980, when it dropped by 9%.

There is an inverse relationship between bond prices and interest rates, so when interest rates go up, bond prices must come down. What was different about last year was how quickly The Fed raised rates – from zero to over 4% in a matter of months. Our economy has become addicted to zero percent interest rates and this rapid pace shocked both the bond market and the stock market. 2022 was only the third time since the 1930s that both stocks and bonds finished down for the year. All major asset classes lost money in 2022; the only asset that gained was commodities, thanks to the surge in inflation.

One area that proved incredibly resilient was the labor market. In fact, one could argue the labor market was too good for The Fed’s liking. A significant input cost for goods and services is labor, and when labor is costly, prices must go up. It is likely The Fed will continue to raise rates until the tight labor market shows signs of weakening.

As the year finished, it seemed as though inflation had peaked and begun its inevitable descent. Declines in prices were seen in just about all areas, with the notable exception of housing. The challenge with this, however, is the convoluted way in which the Bureau of Labor Statistics calculates home prices. They use a metric called Owner’s Equivalent Rent, which is essentially what would you pay in rent to live in your house. The two issues with this metric are that your mortgage payment is fixed and does not adjust monthly, and that there is an extreme lag in the data as it filters into the CPI calculation. While the official CPI shows shelter costs increasing, all evidence points to real estate prices and rents coming down. 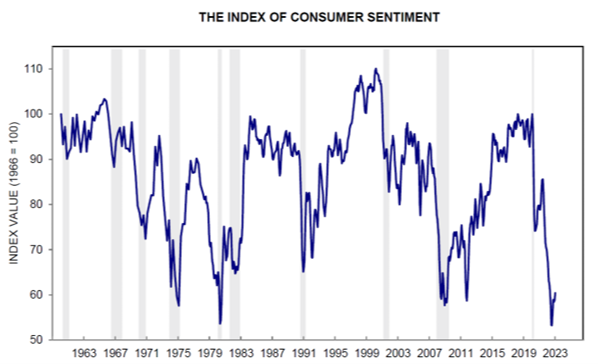 To me, the most fascinating data point in what was a year filled with crazy data was the University of Michigan’s Consumer Sentiment Index. Since the 1960s The University of Michigan has surveyed at least 500 consumers a month to gauge their feelings about the economy. With a simple six question format, the survey seeks to capture the mood of America’s consumers. June 2022’s reading was the lowest reading in the history of the index. I’ll be the first to admit that last year was not the best economic year in our lifetimes, but was it the worst year since the late 60s? Was it worse than 2020 COVID, than the financial crisis of 2008? What about the tech bubble bursting? hyper-inflation of the early 80s? I’ll let you answer that question for yourself, but I’m imagining people sitting in Starbucks drinking an $11 double mocha grande latte cappuccino chai thing, rage Tweeting on their new iPhone 14 about how bad their lives are. The good news in all this is that during past periods when the Consumer Sentiment survey bottomed out, the average market returns over the next twelve months were 25%. I’m not saying this will happen in 2023, but I do believe this is the embodiment of Warren Buffet’s best advice: “Be fearful when others are greedy and be greedy when others are fearful”. I don’t know what’s driving this wave of negativity – perhaps social media, perhaps political dysfunction – or perhaps everyone is just Fed up.

So dear clients, as we enter 2023, there are reasons to be hopeful. While risks remain, we are somewhat optimistic. Click here for Bryan Beatty’s outlook for 2023.

As always, we are so thankful for your trust and confidence – it truly means the world to all of us at EBW. As we begin our 20th anniversary year, I wish you health, happiness, and prosperity.