From Your Advisors at EBW: June 2022 Market Commentary

I start with these immutable words from the legendary investor because they ring so true. Everyone is fearful right now and for good reasons. There is a lot of uncertainty facing the world, from a never-ending pandemic to war in Europe, to rising gas and food prices and of course a growing political divide in our country. All these issues take their toll on us, and social media reminds us of how bad things are on a constant basis.  It’s okay to be scared, concerned and to be fearful, But as Mr. Buffett so eloquently pointed out, even in fear there is opportunity.

Yesterday, The Federal Reserve Bank hiked short-term interest rates by .75% as they continue their aggressive campaign to slow our economy and reign-in inflation. This was the largest single meeting hike since 1994. It appears the Fed wanted to send a strong message after Friday’s hotter than expected reading of inflation and very negative University of Michigan Consumer Sentiment survey. Interestingly, according to the Fed’s own predictions, they see inflation coming down quite a bit. Using their preferred measure of inflation, the Personal Consumption Expenditures (PCE) index which is different from the more mainstream Consumer Price Index (CPI), they project a decline from April’s 6.3% reading to 5.2% by the end of this year, followed by 2.6% and 2.2% in 2023 and 2024. The reason I find this interesting is if the Fed sees inflation coming down and this bout of inflation is not due to outsized consumer demand but really about an impaired supply chain, did they really need to act so aggressively yesterday? Will bruising demand, ie the consumer’s ability/willingness to buy goods, repair a supply chain that’s going to heal itself over time anyway? I can only assume this is an effort to reassert themselves after being accused of not taking inflation seriously enough in 2021. The problem is that this step increases the risk of tipping the U.S. into a recession.

When you strip out energy and food prices, the so-called Core CPI, has come down a bit. Not as much or as fast as we would like, but it is showing signs of moderating. I know it seems dumb to take out food and energy because they represent such a big part of our budgets, but due to how much these two components can fluctuate over the short-term, Core CPI is better for longer-term comparisons.

So, what’s keeping core inflation stubbornly high? Used car prices, new car prices, housing and airfares are the main culprits. There’s good news in the auto front, as several manufacturers have reported improvements in the chip shortage that’s been slowing their manufacturing. High home prices are likely here for a while, but rising mortgage rates should prevent them from going much higher. Supply chains will continue to heal themselves over the course of the year and changing consumer spending should put additional downward pressure on inflation.

Household balance sheets are in better shape today than they have been in a while. The economy is very close to full-employment, cash deposits remain elevated, household debt ratios, while up slightly from the lows of earlier this year are still below levels last seen prior to the 80’s. People have been cooped up for more than two years and there is a lot of pent-up demand. We want to get out and enjoy our lives again, even if that does mean spending $100 to fill up the family truckster. Will higher prices change our plans? Probably not that much.

All of this is not to ignore that many families will be struggling mightily during this period of high prices. For those in the lowest income bracket, food and energy can make up 55% of their budgets and they have little room to absorb higher costs. The good news here is that unemployment is low, and wages are rising. From a macro perspective however, most Americans will whether this storm okay.

Our economy is slowing, the data is clear on that point. With the Fed’s aggressive rate increase yesterday, the odds of a recession have increased, whether it’s this year or next is an open question. The good news is that due to the positive aspects mentioned earlier, this recession should be relatively short and minor. Perhaps the Fed sees the best way out as creating a mild recession which will bring inflation under control more quickly and then rebooting the economy afterwards. Or perhaps the Fed still sees the Goldilocks “soft-landing” as an option. Either way, stock market volatility is likely here to stay for a bit longer as market participants search for more certainty in the Fed’s path. The problem here is their path is fluid.

I have no idea if we have reached maximum fear, but what I do know is the best way through these uncertain times is to stay diversified and stay invested. Trying to time the market doesn’t work because the best days are often tightly grouped with the worst days. Take 2020 for example. As the worst fears of the pandemic came to pass, markets sold off in dramatic fashion. On March 16th the S&P500 sold off by a whopping 11.98% for the third largest daily loss in history. March of 2020 also saw the 8th and 19th worst losses as well. However, that month also gave us the 9th and 10th best days ever. We made it through that challenging period and enjoyed all-time highs in January of this year. There’s no doubt in mind that we’ll get through this episode too, we’ll just need some patience and confidence in the strategy. As always, we are monitoring conditions and will likely be making additional portfolio changes in the very near future. Stay tuned for more details.

So, back to Warren and his assertion that fear is a contra-indicator of future market performance. What does the data tell us? Take a look at the chart below and see for yourself. 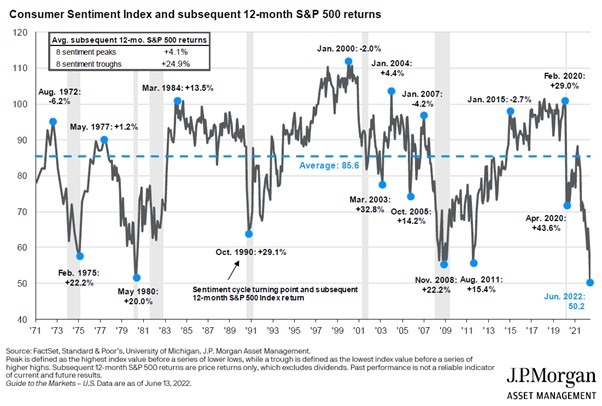 As always, your trust and confidence mean the world to us! Please reach out if you would like to discuss this or any other topics with us.