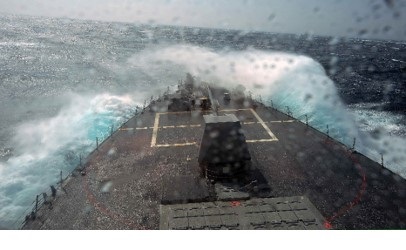 Keep Your Eye on the Horizon: A Coronavirus Update

For a short time while growing up, my family owned a boat. As often happens in small boats, the waves and wakes from larger vessels cause the boat to rock up and down, sometimes quite violently. On one particularly bad occasion a storm popped up, I found myself turning a bright shade of green and about to return my lunch to the seas. My father, who was once in the U.S. Coast Guard calmly told me to focus on a fixed point on the horizon and instructed me not to take my eyes off it. Not surprisingly, this worked, and the sickness eventually passed. I find Dad’s advice no less helpful in today’s choppy stock markets.

As selling in the financial markets hits a fever pitch, trying to predict short-term movements is a fool’s errand, but it’s likely there will be more nauseating days like Monday. As the coronavirus spread from China to the rest of the world, investor reaction was as swift and violent as a squall. Panic is probably the best word to describe it. This absolute fear is evidenced by recent selling in the SPY, an S&P 500 index fund. On March 5th, it made history by becoming the first security to ever trade over $100 billion in a single day.

For us, our focal point on the horizon must be the overall economy. Right now, it’s the closest thing we have to the North Star. At the beginning of February, consumer sentiment was just below its post-recession highs, US stock markets were making all-time highs, trade relations with China were thawing, US household net-worth had never been higher, unemployment was at 50-year lows and global growth looked set to accelerate. Sure, there were signs of a decelerating U.S. economy and stock prices were getting a bit lofty, but the consumer is strong, and the preponderance of evidence pointed to continued albeit slow, economic growth.

As health officials fight to contain the virus, their measures will likely slow global economic growth. Take Italy as an example. This should however be temporary and could set us up for a strong rebound, provided decisive policy action is taken. While the Federal Reserve Bank (the FED) has already reduced rates by .5% in their first emergency rate cut since the 2008 financial crisis, their actions failed to assuage investors. Though another rate cut may be in the offing later this month, we think it will be equally as disappointing. With interest rates near all-time lows, further reductions have less ability to stoke economic growth. What markets need is coordinated fiscal action from elected officials. Spending bills such as on infrastructure and investment into renewable energy may be good options to stimulate the economy. It will be crucial to ensure money is available to those industries most affected by the virus, such as airlines, cruise lines and hospitality. Targeted lending facilities are necessary to maintain access to capital.

Monday’s panic was also stoked by a sharp decline in oil prices as Russia refused to agree to steeper production cuts sought by OPEC. It’s impossible to know Russia’s motivation for this move, as their economy is hugely dependent on oil prices. Perhaps it’s just for the sake of creating additional instability in global financial markets. Likely it’s an attempt to break the back of U.S. oil production companies. Russia tried this once before in 2015/2016 and found U.S. oil companies to be surprisingly flexible. If they endeavor to do greater damage this time around, they will have to be resolute and willing to accept the damage to their own economy months of lower oil prices will cause. This time, Russia may be emboldened by the vast cash reserves they hold today as compared to 2016. As prices plunge, U.S. oil companies will face significant financial pressure. These companies are typically highly leveraged, meaning they borrow a lot of money to finance their operations. It’s likely some will be unable to make their loan payments and default on their debt. This could in turn adversely affect the institutions and investors which have loaned the money. The challenge will be in ensuring money is available to these institutions. Ultimately, once the initial shock wears off, lower oil prices could provide an economic tailwind as petroleum is a significant input cost to many of the goods we purchase. Lower oil prices may be akin to a small tax cut for consumers as we all use it in one form or another.

The coronavirus shock will likely be similar to other market shocks caused by natural disasters. Once the initial disruption fades, economic activity will resume. However, the double whammy of COVID-19 and plummeting oil prices has, in our opinion increased the probability of a recession. While a recession is not our base case scenario, we do feel that if one occurs it will be mild and short lived. Much depends on the policy initiatives put forth in the coming days and weeks.

As events continue to unfold, the situation will remain fluid and investor reaction is likely to be dramatic. There will be big down days to come and I suspect big up days too. It’s likely there won’t be a confirmed market direction until we get a better understanding of the level of outbreak here in the US and the efforts enacted to contain it.

Our thoughts and sympathies are with those people and their families directly impacted by the virus.  Beyond the health and safety precautions recommended for us all, we continue to advise you to stay invested and remember, many of our portfolios were built with the bad times in mind. Selloffs are a natural part of investing and it’s times like these when you need to find your point on the horizon, tune out the waves and ride out the storm. We’ll get there together. Please feel free to call us if you have any questions or want to talk more about events. We are always here for you.

Wishing you and your family continued health,

Your Team at EBW