This is not what I thought I would be writing this year. I mean, 2018 wasn’t supposed to be this way – all the experts said so. I was gathering balloons and confetti, preparing to celebrate another strong year. We were coming off the remarkable performance of 2017, optimism was in abundance, expectations for growth were huge, and we got added stimulus in the form of tax cuts -- so why did it rain on my parade? 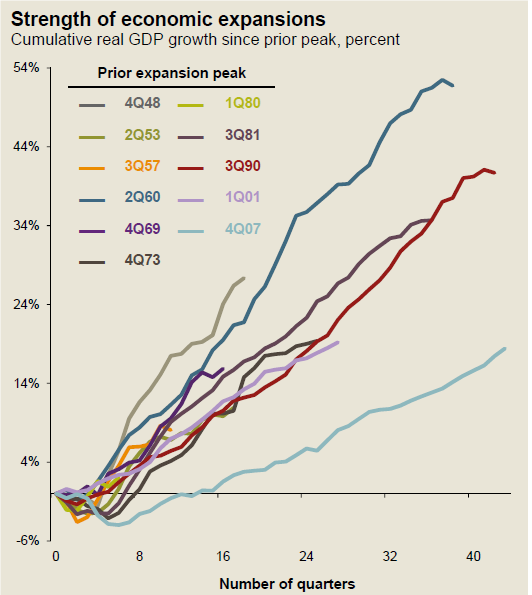 To understand where we are today, we must first travel back in time to June 2009. As the world recovered from the Great Recession, a nascent U.S. economic expansion began to take hold. Who would have thought nine years ago that this modest expansion would grow to be the second longest on record? Should it continue past May, our little growth spurt will take its place as the longest on record. But this cycle is starting to show its age. One notable characteristic of the later part of an expansion is dramatic market swings, as investors endeavor to interpret mixed data. We saw one of these big data-driven dips in February when the jobs report indicated inflation might be higher than anticipated. With higher inflation comes higher interest rates, which act as an anchor dragging the economy slower. As it turned out, the inflation fears were overblown but the damage was already done. From the end of January through the beginning of April 2018, the S&P 500 shed 10%, marking the first true market correction in two years. After bottoming out on April 20th, the 500 largest companies in the U.S. had a heck of a run, climbing 13% through September 20th. Unfortunately, the markets couldn’t hold onto these gains and tumbled 19.8% in a little over three months. As sentiment seemed to change just after Christmas, the S&P enjoyed a bit of a rally during the last week of the year but was unable to erase the losses. By the end of the year, large U.S. stocks lost 4.4% of their value.[1] As disappointing as this performance was, these large companies still performed better than their smaller U.S. counterparts, which presented investors with an 11% loss during the year[2].

While market volatility is a hallmark of late-stage expansions, 2018 had the added uncertainty of a president who tends to indulge his more impulsive whims on Twitter. As much as the markets overlooked Trump’s tweets in 2017, 2018 seems to be the year when tweets matter. As the President conducted our nation’s affairs via mobile phone, markets reacted. This began on March 2nd when Trump tweeted that “Trade wars are good and easy to win”. This came just a day after his surprise announcement of tariffs of 25% on steel and 10% on aluminum coming into the country. 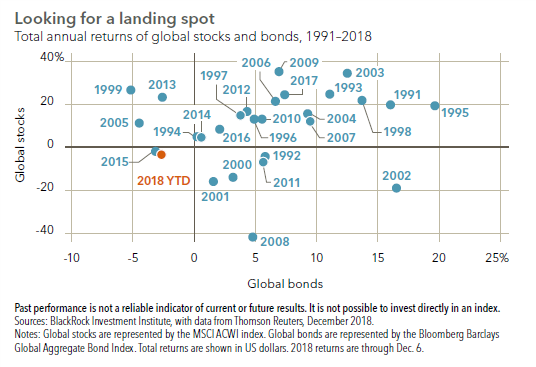 On March 22nd Trump signed tariffs on $60 Billion of Chinese goods. This is the same day he challenged Joe Biden to a fight via Twitter. In response to the tariffs, China announced increased taxes on U.S. products such as meat, wine, fruit, soy, ethanol, and others, seemingly targeting America’s heartland. This tit-for-tat exchange continued throughout the year, exacting a heavy toll on international economic activity and stock prices. By the time the dust settled, investments in developed international countries had lost more than 13% of their value and those in emerging international countries had lost 14.2%.[3]

Typically, when stocks do poorly, bonds do well. But 2018 was anything but typical. As the Fed continued its measured rate hiking campaign, bond markets began to take notice. Policymakers at the Fed have two primary objectives: to gradually increase rates to the point where they are neither accommodative nor restrictive, in efforts to maintain an economy that enjoys full employment with stable prices (meaning low inflation) and to put this arrow back in their quiver so they can use it when the next economic crisis comes. As the economy continued to show improvement, the Fed felt we no longer needed the artificial stimulation of low rates. This prompted President Trump in December to publicly disagree with Fed Chairman Jay Powell in a series of tweets and interviews, leading many to believe he intended to fire the Chairman.  While administration officials denied this, stocks reacted negatively. The pressure did not dissuade the Fed from their fourth .25% rate hike of the year. A basic tenet of investing is that when interest rates rise, the dollar value of existing bonds decline. The rate on ten-year U.S. Treasury bonds started 2018 right around 2.5% and peaked at 3.24% in November, before declining to 2.68% in December. This rise in rates led to mild declines in bond prices for the year. Notably, this is only the second time since 1991 that both stocks and bonds have lost value. [4] (see figure 2, Looking For a Landing Spot) 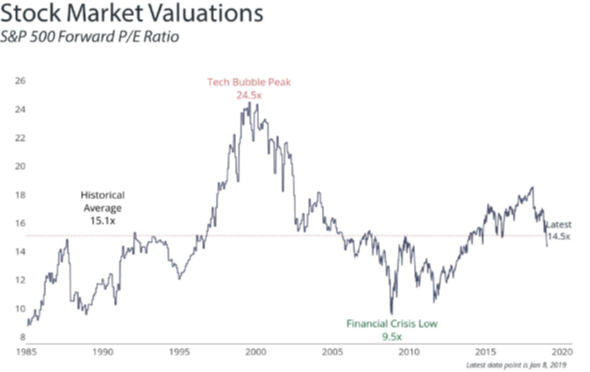 Seemingly indifferent to the tweets and market gyrations, the economy continued to march along. Gross Domestic Product (GDP), which is the broadest measuring stick of economic activity, grew 3% year-over-year in the third quarter[5] of 2018. This stands in contrast to average GDP growth of 2.3% since this expansion began. Buoyed by the stimulus of the tax cuts, U.S. corporate profits soared to their highest levels in six years, booming 3.4% in the third quarter and over 10% from the third quarter of 2017[6]. As employers added more jobs, unemployment levels sank to lows not seen in 49 years[7].

One positive side to the recent sell-off is that, as a function of their earnings, stocks haven’t been this undervalued in a long time. While there is almost no correlation to stock valuations and market returns over the following 12 months, there is a strong relationship three and five years out. Buying at attractive valuations often rewards investors over longer timeframes. (see figure 3, Stock Market Valuations)

2018 certainly gave investors a lot to digest. Late cycle volatility, trade wars, the mercurial nature of the President, uncertainties about the direction of Europe, and higher interest rates all conspired to ruin the festivities. Markets can be fickle, and in the age of unprecedented access to information and a constant stream of news, they can be ruled by emotions – at least over the short-term. As emotions push the market and momentum takes over, it can be tough to break out. So, while it is nearly impossible to predict short-term market performance, or to definitively explain why the markets did what they did, it is possible to identify economic trends. Over time, markets should always come back to economic fundamentals.

Can we cue the marching band yet? Click here to read Bryan Beatty’s thoughts.

Past performance is not an indication or guarantee of future results.