Bryan Beatty and Howard Pressman in Washingtonian article: Now Is the Moment to Buy a House in DC

Bryan Beatty and Howard Pressman are Featured in Washingtonian Article: "Now Is the Moment to Buy a House in DC—Before Interest Rates Go Berserk in 2016" 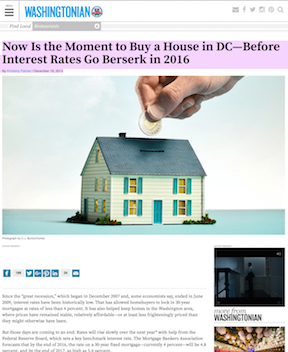 "Since the “great recession,” which began in December 2007 and, some economists say, ended in June 2009, interest rates have been historically low. That has allowed homebuyers to lock in 30-year mortgages at rates of less than 4 percent. It has also helped keep homes in the Washington area, where prices have remained stable, relatively affordable—or at least less frighteningly priced than they might otherwise have been.

But those days are coming to an end: Rates will rise slowly over the next year* with help from the Federal Reserve Board, which sets a key benchmark interest rate. The Mortgage Bankers Association forecasts that by the end of 2016, the rate on a 30-year fixed mortgage—currently 4 percent—will be 4.8 percent, and by the end of 2017, as high as 5.4 percent."

“I don’t see a change in interest rates until we see a GDP growth rate of above 3 or 4 percent for several quarters in a row,” says Bryan D. Beatty, a partner at the financial-planning firm Egan, Berger & Weiner in Vienna. (The quarterly GDP fluctuated in 2015 from 0.6 in the first quarter to 3.9 in the second and 2.1 percent in the third.) If the Fed senses any slowdown in economic growth, Beatty notes, it could opt to continue to keep rates low.

That’s why many financial experts expect a slow rise in interest rates over time. “At some point, they have to go up, but I don’t think they are going to go up very quickly—it will most likely be a gradual increase,” says financial planner Howard Pressman, also at Egan, Berger & Weiner.