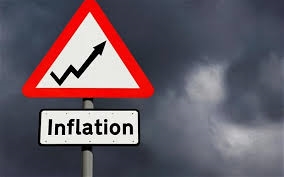 To be sure, “inflation is always and everywhere a monetary phenomenon,” as Milton Friedman said some time ago. But should inflation rise, as some experts predict, it could have a dramatic impact on all aspects of your financial plan, including your balance sheet and your cash flow.

So what should you do if and when inflation returns? When and how should you re-position your assets, your certificates of deposit and your stocks and bonds? What about your liabilities — your mortgage and credit cards? When and how should you address the effect of inflation on the various line items in your budget, such as food, energy, health-care expenses and the like? What about inflation’s impact on your income? When might you consider asking for a raise?

Before those questions can be answered, these facts should be examined.

First, consider the negative effects of inflation. In general, you are affected adversely when inflation seeps silently through the economy. Why? The prices of everyday items become increasingly more expensive. At first it starts slow. But if inflation returns as it did in the 1970s, the mere anticipation of inflation can cause even more inflation as behavior becomes altered through that anticipation.

Consider, for instance, the farmer who raises chicken for sale in the poultry industry. He knows that the price of his feed for his chicken will cost for example $10 for a 50-pound bag. At that price he can sell his chicken for a small profit and care for his farm and family. If the farmer anticipates dramatic inflation, he may increase his current demand for chicken feed to store up before prices rise. By over purchasing the feed, this increase in demand without a corresponding increase in supply causes the price of feed to rise. This is a normal mechanism to reduce too much demand.

Next consider the worker, or as was the case in the 1970s, the unions. As inflation began to show in the early part of the decade, the union was set to renegotiate their wage contracts. Anticipating rising prices, they bargained hard for a higher wage cost of living adjustment (COLA). This actually aggravated the inflation problem since changes in wages are the largest component of the CPI or consumer price index.

Further consider the pressure this labor cost puts on the business owner. In order to maintain the profit margin, the price of the end good or service must also rise to reflect the increased cost of labor. Now we reach the consumer.

The consumer seeing the cost of goods or services rising rapidly feels that they must also accelerate their consumption for fear of losing value of their own money. They increase the purchase of hard assets, first as a store of money i.e. collectibles, jewelry, or they make major purchases like cars or homes before that inflation made it more expensive. Governments are also consumers, and they have more buying power than the general public with their ability to borrow, tax and print money to accelerate their own purchasing for much the same reason as the individual family would accelerate their own.

Inflation is also a challenge to banks. If banks are to receive back the money they lent and get any real return on that investment they must charge an according borrowing rate. If they anticipate accelerating inflation expectations, they will raise borrowing costs. This causes an acceleration of investment by businesses and individuals who want to begin investment before inflation occurs.

So how does all this affect you? Who stands to benefit from rising inflation and who does not?

Homeowners: If you’re a homeowner, it’s likely that you will see the value of your home rise as well. That’s because real assets tend to rise with inflation.

Commodities: Because commodities become an end product or service and are part of the production cycle they maintain their value against rising inflation. Consider the lumber that builds the house. Consider the iron and nickel that makes the steel beam that builds a highway. Commodities become increasingly valuable because they can be turned into something else after the prices have risen and will re-coup the loss of purchasing power. Precious metals such as gold are a standard and trusted store of value as a proxy for currency; however with limited supply and limited productivity uses, gold can be prone to extra risk of price volatility.

Investors: If you own stocks, you’ll likely see the value of your investments rise with inflation as long as the economy grows during that inflationary period. That’s because increasing prices results in increased earnings. And earnings drive the price of stocks. Clearly the companies you invest in must manage the rising costs properly and assuming they do — stocks win. At times there can be the dreaded “Stagflation” experienced at points in the late 70’s where we experienced inflation without growth.

Lenders: If you are invested in fixed-income securities, including bond mutual funds, it’s likely you will be hurt in an inflationary environment. That’s because the value of your fixed-income security will drop in value as interest rates rise. In essence, this is a reflection of the declining purchasing power of those future dollars that will be paid back in the form of interest and principal.

Savers: It’s hard to say whether savers will benefit from rising inflation. It depends on what financial planners refer to as the real rate of return, the difference between what’s the nominal rate and the rate of inflation. The nominal interest rate is the amount you earn on a certificate of deposit (CD) or money market account, for instance. The real rate of return is the difference between the nominal rate and the rate of inflation or what some call the risk-free rate of return. So, let’s say you own a three-year CD that pays three percent. If inflation is at one percent, then your real rate of return is two percent. But if inflation is 4 percent, then your rate real of return is negative one percent. When saving money during times of rising inflation, it’s best to use the shortest term investments possible. That way you can keep reinvesting at higher rates when your CDs or bonds mature. In addition, you might consider investing in inflation-protected securities, such as Treasury Inflation Protected Securities or TIPS.

Retirees: If your retired and living on a fixed pension, rising inflation can wreak havoc on your finances. Likewise, if you’re living off the interest income from your CDs and bonds, you might struggle to keep up with rising prices, as well. Consider repositioning your money to take advantage of rising rates. For instance, dividend-paying stocks might provide you with some protection against rising inflation. Likewise, you might want to consider annuities that have guarantees.

Renters: If you’re renting, do consider adjusting your budget to include higher living expenses. In inflationary environments, landlords will likely increase the rent to reflect the decreasing value of the rent they receive from the renter.

Dollar: The value of the U.S. dollar is depreciating. And as the value of the dollar decreases, it can accelerate the inflationary environment especially if confidence in the future of that currency were to decline.

With the government stimulus at record levels and global sovereign (government) debt at staggering highs, investors and savers alike need to be prepared for the return of inflation and to protect their investments and preserve their purchasing power. You don’t want to be caught off guard. Inflation is hard to see and by the time you notice rising prices it might already be too late to prepare.