Howard Pressman Featured on WUSA9, The Dark Side of Retirement

Howard Pressman Featured on WUSA9, "The Dark Side of Retirement"

June 18, 2014, WUSA9 — Howard Pressman was featured talking about The Dark Side of Retirement hosted by WUSA9 reporter Debra Alfarone. 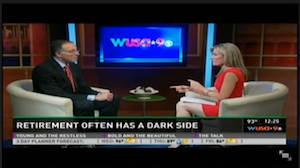 “To hear the financial services industry tell it, retirement looks like a distinguished gray-haired man and an attractive silver-haired woman walking hand in hand down a magnificent beach, enjoying the sunset while gazing lovingly and contentedly into each other’s eyes,” Pressman told Ms. Alfarone. “They don’t have a care in the world, and why should they? They are retired.”

But there is a dark side of retirement that no one talks about, he insists, pointing to statistics from the Substance Abuse and Mental Health Services Administration that show:

And according to the Centers for Disease Control and Prevention:

What can you do about it Pressman suggests asking yourself, or your loved one who has retired, the following: